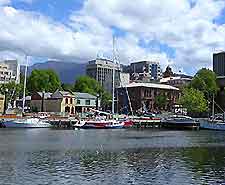 The Central Business District (CBD) in Hobart is Tasmania's premier commercial centre and stands alongside many of the principal attractions. Edged by Collins Street, Elizabeth Street, Liverpool Street and Murray Street, the Central Business District is home to all of the city's main banks, which have their offices near the mall on Elizabeth street. Some of the largest industries in Hobart are situated on the outskirts of the city and these include the Cadbury-Schweppes Chocolate factory, Electrolytic Zinc and the paper mills at Boyer, next to the Derwent River.

With a mixture of modern architecture, heritage buildings, shopping centres, department stores, street cafés and restaurants, the CBD in Hobart features some of the best examples of classical colonial architecture. Full of character, this is Tasmania's most important commercial city, with many of the island's largest corporations and company head offices. The city centre is easy to travel around, being a structured and organised grid network of interconecting roads.


Hobart has a good travel system, including the harbour area and the nearby Hobart Airport (HBA), which is Tasmania's largest and busiest airport. The city is also an important transport hub and has a number of world-class business facilities, meeting rooms and conference centres, all with excellent business facilities.

Tourism, retail, hospitality and the vast campus of the University of Tasmania (UTAS) - which employs over 1,000 staff, make up a large part of Hobart's thriving economy. As a result, there is a superb selection of shops and restaurants in and around the Central Business District. The hotel industry in Hobart also reflects the high number of tourists and the city is full of outstanding hotels and guest houses, often with exceptional views of the waterfront and offering competitive rates.

Offices and businesses in the city of Hobart are usually open on weekdays between 09:00 to 17:30, and most banks tend to operate from 09:30 to 16:00 Monday to Thursday and remain open until around 17:00 on Friday. There are plenty of ATM cashpoint machines situated throughout Hobart, providing a convenient way to exchange currency in the city.

Shops open from around 08:00 or 08:30 until 17:00 or 17:30 on weekdays and many shops in Hobart have extended opening hours on Thursdays and Fridays, staying open until as late as 21:00. Shops open all day on Saturday and an increasing number are now beginning to open on Sunday, particularly in the heart of central Hobart.

A brief and friendly handshake is usually the customary greeting in Hobart and throughout Australia as a whole. It is quite acceptable to address new acquaintances on first name terms in Hobart and most local businessmen and women are very friendly and hospitable.

Many of the restaurants and cafés in Hobart and throughout Tasmania have a fairly strict 'no smoking' policy. The city's offices, businesses and corporations are generally 'non-smoking' and Australians are often strongly anti-smoking. As a rule, it is always a good idea to only smoke when in the company of like-minded people.