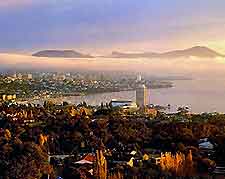 Many attractions and hotels are based within the Tasmanian city of Hobart, often being concentrated around the Central Business District or within one of the surrounding neighbourhoods. The Constitution Dock is an especially appealing place to hang out, with a number of popular eateries close by. Of note, it is here where the yachts arrive after completing the famous Sydney to Hobart Yacht Race.

Tourists looking for some great panoramas of the city will find that a trek to the top of Mount Wellington will certainly not disappoint, with its enclosed observation deck at the very summit making it well worth any effort to reach the top. Those planning a trip up Mount Wellington should be aware that the temperature quickly cools down as you approach the summit, meaning that warm clothes are essential. A pleasant way to descend quickly is to join one of the popular downhill bicycle tours.

Salamanca Square has become an especially trendy part of Hobart and many visitors to the city choose to spend time here, admiring the views of the harbourfront whilst enjoying a spot of al fresco dining. Next-door, Battery Point offers a taster of the city's military heritage, while Sandy Bay is the place for seaside activities.

Hobart city centre incorporates the Central Business District (CBD), which is surrounded by Collins Street, Elizabeth Street, Liverpool Street and Murray Street. This part of the city is home to many excellent shopping centres, which are particularly concentrated around the Main Road and Elizabeth Street. Other important landmarks here include the large pedestrianised Franklin Square, the Town Hall, the Cat and Fiddle shopping arcade, Brooke Street Pier, Constitution Dock and the Victoria Dock.

When the city was first founded, this high hill located on the northern side of Hobart was reserved for the use of the governor, with building restrictions across the hill. This green area of parkland soon became known as the Queen's Domain and contains wildlife reserves, sports fields, playing grounds and scrubland. The Queen's Domain area offers spectacular views across Derwent River and the city centre. 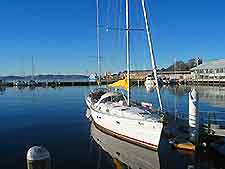 The Waterfront is now one of the city's most fashionable areas, with many trendy street cafés, bars, restaurants and specialist handicraft shops. Centred around Franklin Wharf, the considerable renovation here has breathed fresh life into this historic area, which was once a busy port, and this has also become a lively nightspot.

The Gasworks Complex is a small and compact district situated on the waterfront. Previously an industrial area, attractions around the Gasworks include a local museum, specialist shops, cafés and heritage buildings. 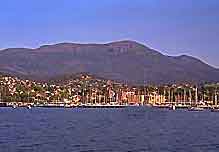 Home to some of the best views of the cityscape, the stunning Mount Wellington is situated in southern Hobart and can be seen throughout the city. Attractions here include walking trails, seating areas, spectacular views of the city, and a winding road, which travels to the top of the mountain.

Situated within the Salamanca district, close to the city centre, Salamanca Square is a popular spot for tourists staying in Hobart. With rows of restored sandstone warehouses on the harbourfront, other attractions at the square include numerous street cafés, restaurants, speciality shops, seating areas, buskers, regular live entertainment and the busy weekly flea market.

Battery Point is the historic centre of Hobart, being full of heritage buildings sited behind Princes Wharf and Salamanca Place. This old port area was named Battery Point after the prominent gun battery, which used to stand next to the port's guardhouse. The neighbourhood was once a thriving maritime area and this is reflected in the houses, which range from charming workers' cottages to grand mansions, together with many interesting small shops, cafés, restaurants and public houses. 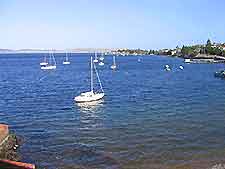 Sandy Bay is a sizeable coastal resort, with a number of exceptional gardens, imposing hotels and scenic views. This popular seaside location also features a good selection of shops and cafés, as well as a large casino complex.

Bellerive Village, in eastern Hobart, is a small and historic part of the city. Popular with tourists, Bellerive contains around 20 interesting heritage buildings dating back to the mid-19th century. Also here are various walking trails and other places of historical interest.

Bruny Island is a short trip from the city centre and has a population of around 500. With some nine ferries travelling to the island each day from Kettering, Bruny Island is almost divided into two, with 'North Bruny' and 'South Bruny' being connected by an extremely narrow strip. Highlights on the island include camel tours, bush walking, mountain biking, horse riding, surfing, swimming and fishing.

The Eastern Shore, reached by heading across the famous Tasman Bridge, is home to many important attractions. These include the Bellerive Oval cricket stadium, which regularly hosts large international and Australian test matches during the city's cricket season, from October until March. The coastal Eastern Shore area also features many exceptional spots for scuba diving, swimming, fishing, sailing and other recreational activities.

The picturesque Derwent Valley area of Hobart is located to the north of the city. Full of large vineyards and wineries, the valley is renowned throughout Australia for its exceptional wines. Also here are a number of enormous national parks, walking trails, rainforests and natural areas of outstanding beauty.