The stories that Hobart has to tell about its past are both interesting and endearing, and as you explore the city you will notice all kinds of landmarks and historic buildings offering an insight into years gone by. Hobart is extremely proud of its rich Tasmanian heritage and this is apparent when you cross the lengthy Tasman Bridge, cruise down the Derwent River or pay a visit to either Government House or Parliament House.

A real must see is the Port Arthur Historic Site, which resides on the Tasman Peninsula, being just over an hour away and to the south-east. More than 250,000 visitors come to Port Arthur each year, to see the open-air museum and learn about its sizeable penal colony during the 19th century, with the decaying prison colony site and convict-built landmarks now proving to be a leading tourist magnet. Funding from the Australian government has helped to preserve the past and promote the history of this World Heritage Site, although most like to forget about the mass-murder that took place here in the mid-1990s. 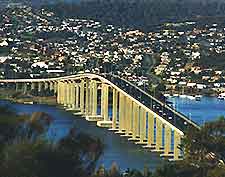 Address: Tasman Highway, Hobart, Tasmania (TAS), 7000, Australia
Tel: +61 (0)3 6230 8233
A giant bridge with no less than five traffic lanes, the Tasman spans the Derwent River, close to the city centre, and connects a number of places of interest, such as the airport. The Tasman Bridge was built between the years of 1960 and 1964, and measures in at a little under 1,400 metres / 4,593 feet in length. Just a few days into 1975, a cargo ship crashed into the bridge, causing two pylons to collapse. Reconstruction followed soon after this disaster and traffic was able to cross once more just ten months later.
Open hours: daily - 24 hours
Admission: free 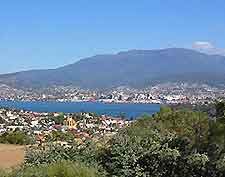 Address: Hobart, Tasmania (TAS), 7000, Australia
Tel: +61 (0)3 6230 8233
When it comes to natural landmarks in Hobart, they certainly don't come any bigger than the Derwent River. Many years ago, the banks lining the river looked very different, being covered in areas of woodland and inhabited by the Aborigines. The 19th century saw the River Derwent bring the city much wealth, providing a natural deepwater port and allowing sizeable whaling ships to sail right into the centre. Today, riverside walking trails are accompanied by popular cruises, picnic spots and a choice of water sports.
Open hours: daily - 24 hours
Admission: free

Address: Domain Road, Hobart, Tasmania (TAS), 7000, Australia
Tel: +61 (0)3 6234 2611
Government House is to be found on the northern side of the city centre, within the Queens Domain bushland and alongside the Royal Tasmanian Botanical Gardens. Constructed in the 1850s and boasting Victorian architecture, more than 70 rooms and superb views of the Derwent River, this house is certainly on a grand scale and serves as the governor of Tasmania's official residence.
Open hours: hours vary
Admission: free

Address: Salamanca Place / Lower Domain Road, Hobart, Tasmania (TAS), 7000, Australia
Tel: +61 (0)3 6230 8233
Parliament House is a striking building with many impressive features and is situated in the Salamanca area of Hobart. Dating back to the early 1840s and built by convicts in sandstone, this structure is home to a small museum area, an elaborate interior, a pleasant strolling garden and regular guided tours. The Government of Tasmania have met here since its completion and the building also functioned as the Customs House from 1841 to 1904. Visitors may like to check out the Parliamentary Library, which was founded in 1852, while you can also observe the frequent public debates and Parliamentary Committees.
Open hours: daily
Admission: free 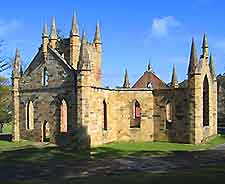 Address: Arthur Highway, Port Arthur, Tasmania (TAS), 7182, Australia
Tel: +61 (0)3 6250 1077
The Port Arthur Historic Site is home to a number of notable landmarks, many of which are important reminders of the convict past and early settlers in this area 200 years ago. With more than 30 restored buildings and ruins, harbour cruises and a large visitors' centre, Port Arthur ranks amongst Australia's most historic districts. Highlights include the Penitentiary - once a thriving granary and flour mill, the separate prison, the Commandant's House, the ruined church and the natural stone Tasman Arch, which is an immense cave structure on the coast. Visitors are able to either explore at their own pace, or join a guided tour of attractions such as Point Puer and the Isle of the Dead. In the evening, Ghost Tours are often available for those feeling brave.
Open hours: daily
Admission: free 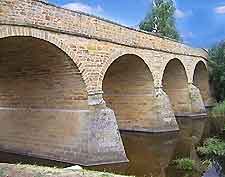 Address: Bridge Street, Richmond, Tasmania (TAS), 7025, Australia
Tel: +61 (0)3 6260 2132
Richmond Bridge stands on the northern outskirts of the city, where it resides close to St. Lukes Cemetery and is one of the oldest bridges in the whole of Australia, being still in daily use. Built between 1823 and 1825 by local convicts, this heritage-listed sandstone bridge spans the Coal River and features four large arches, flanked by two smaller arches.
Open hours: daily - 24 hours
Admission: free

Address: 61 Bay Road, New Town, Hobart, Tasmania (TAS), 7008, Australia
Tel: +61 (0)3 6278 1269
Situated in the New Town area of Hobart and next to the Friends Sportsground, Runnymede House dates back to the 1830s. This grand stately home is now owned and managed by the Australian National Trust. Attractions include an elaborately decorated interior with antique furniture, historic paintings and portraits, a large landscaped garden and pleasant views. There are also many exhibits relating to the nautical and whaling interests of the period.
Open hours: August to June, Monday to Friday - 10:00 to 16:30, Saturday and Sunday - 12:00 to 16:30
Admission: charge, discounts available for students, seniors and families, children and members of the National Trust are free

Address: Channel Highway, Taroona, Hobart, Tasmania (TAS), 7053, Australia
Tel: +61 (0)3 6227 8885
Located just across from the Kelvedon Soccer Park, the Shot Tower is one of the city's most instantly recognisable landmarks, towering around 50 metres / 164 feet over the Derwent River. Dating back to the 1870s, this sandstone tower was constructed to produce lead shot, by simply passing molten lead through a sieve at the very top. By the time it reached the water at the bottom, the lead had cooled down, being perfectly spherical in shape. The tower features a number of observation areas at different heights, with 118 steps leading to the very top and offering exceptional views of outer Hobart, the Derwent River and the surrounding countryside.
Open hours: daily - 09:00 to 17:00
Admission: charge, discounts available for children and seniors, children five years old and under are free

Address: Davey Street, Hobart, Tasmania (TAS), 7000, Australia
Tel: +61 (0)3 6237 7160
The historic Anglesea Barracks can be found in central Hobart, between St. David's Park and the Fitzroy Gardens, where they are home to a wealth of military artefacts and memorabilia. Dating back more than 200 years, these barracks are now one of the oldest military buildings in the whole of Australia and are still in daily use. Regular guided tours are available each Tuesday, while the Military Museum of Tasmania also resides on site, within the old prison.
Open hours: Tuesdays, guided tour at 11:00
Admission: charge, discounts available for children and families

Address: Arthur Circus, Hobart, Tasmania (TAS), 7000, Australia
Tel: +61 (0)3 6230 8233
Arthur's Circus is situated within the Battery Point area and is a charming, historic group of cottages, dating back to the mid-19th century and built as homes for the garrison officers. Featuring attractive architecture and restored, period details, a trip here is like walking back into the past.
Open hours: daily - 24 hours
Admission: free