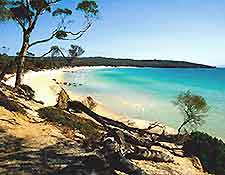 Hobart lies on the south-eastern side of Tasmania, right alongside a particularly beautiful coastline. As a result of its situation, the city is surrounded by many glorious sandy beaches, which combined with its wealth of attractions make this the number one holiday destination on Tasmania.

Many of these beaches are just a short distance from the city centre, often being close to the Derwent estuary and based around Cornelian Bay, Frederick Henry Bay and Sandy Bay. To the east of the city and directly south of Hobart International Airport, Seven Mile Beach is well worth searching out and this expansive stretch lies just beyond Single Hill, alongside the neighbouring town of Lauderdale. 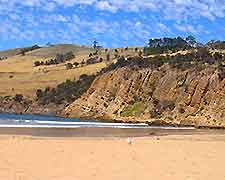 Address: Lower Sandy Bay, Hobart, Tasmania (TAS), 7005, Australia
Tel: +61 (0)3 6238 2711
Long Beach, in the coastal Sandy Bay district, is full of things to see and do. With stunning views of the city, calm water, golden sand and nearby shops, attractions include sunbathing, swimming, snorkelling and sailing. For a bite to eat, head to Sandown Park, where Prossers on the Beach is an award-winning seafood restaurant, boasting fine dining with stunning coastal views.
Open hours: daily - 24 hours

Address: Channel Highway, Margate, Tasmania (TAS), 7054, Australia
Tel: +61 (0)3 6211 8200
Nearby Margate Beach is a scenic sandy expanse with excellent facilities. Situated in the southern suburb of Margate and just past Blackmans Bay, this beachfront is close to many attractions, including shops, cafés, walking trails, seating areas and the nearby Dru Point Bicentennial Park.
Open hours: daily - 24 hours 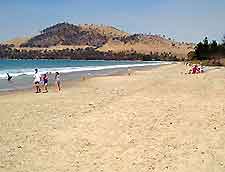 Address: Surf Road, Seven Mile Beach, Hobart, Tasmania (TAS), 7170, Australia
Tel: +61 (0)3 6248 4053
Seven Mile is one of the largest and most popular beaches in the city. Located within Richmond suburb, visitors will be able to enjoy vast expanses of pristine, golden sand and shallow water. This is the perfect spot for sunbathing, swimming, walking and at times, even surfing.
Open hours: daily - 24 hours

Address: Marieville Esplanade, Battery Point, Sandy Bay, Hobart, Tasmania (TAS), Australia
Tel: +61 (0)3 6230 8233
Short Beach, in the Battery Point area, is most famous for being the very spot where the late Hollywood actor, Errol Flynn, learned to swim when he was a boy growing up in the Hobart area. He is honoured nearby by the Errol Flynn Reserve, previously known as Sandy Bay park.
Open hours: daily - 24 hours