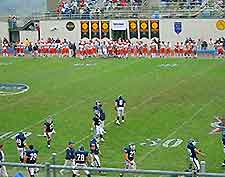 Hobart is certainly an Australian city with plenty in the way of sports, whether you are looking to be a spectator or actually participate yourself. Australian Rules Football is a hugely popular spectator sport in this country and is operated by the Australian Football League (AFL), with many locals referring to this game as simply 'The Footy'.

Tennis and cricket are also very popular in the city. Cricket matches are a major crowd pleaser at both the Bellerive Oval (also known as the Blundstone Arena) and the Tasmanian Cricket Association Ground (TCA) at the Queens Domain.

Other notable stadiums in the Hobart area include the Boyer Oval at the nearby town of New Norfolk (roughly 30 km / 19 miles to the north-west), where both the New Norfolk District Football Club and Cricket Club are based. At the suburb of Sandy Bay, the Queenborough Oval is where you will find the Sandy Bay Cricket Club, as well as the Hutchins Old Boys Football Club.

Those on holiday in Hobart and looking for recreational sports-based activities may like to consider having a go at surfing or perhaps learning to scuba dive. Alternatively, you can try your hand at some beachfront horse riding, go yachting along the coast, or head out of Storm Bay and into the Tasman Sea for an afternoon of deep-sea fishing.

Address: Derwent Street, Bellerive, Tasmania (TAS), 7018, Australia
Tel: +61 (0)3 6244 7099
If you would like to try and catch a game of Australian Rules Football (the season is between April and September), then the Bellerive Oval on Derwent Street is the place to come, being located a little under 8 km / 5 miles to the east and just beneath the Rosny Park area. The Oval is the home ground of the very established Hobart Football Club, who have been playing since 1945 and belong to the Tasmanian State League.

Address: Derwent Street, Bellerive, Hobart, Tasmania (TAS), 7018, Australia
Tel: +61 (0)3 6244 7099
Regular international and Australian test matches are staged at the Bellerive Oval stadium, during Australia's late spring / summer months. The city's main cricket teams are the Tasmanian Tigers and the Hobart Hurricanes, both of which reside here, while the North Hobart Cricket Club is based within the Tasmanian Cricket Association Ground at the Queens Domain park. 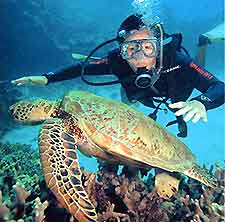 The clear waters on many of Hobart's coastal areas are perfect for snorkelling and scuba diving, although the most popular spot for diving here is around the coastline of the Tasman Peninsula, within easy driving distance of the city centre. The Tasman Peninsula has become well-known throughout Tasmania for its exceptional underwater scenery, which includes large caves, colourful fish and friendly seals. Scuba diving courses, dive schools and equipment hire are all readily available in this area.

Surfers frequently gather along the east coast, where the waves are often favourable and perfect for a spot of surfing. The beaches of Carlton and Clifton are known for their reliable surfing conditions, as is Seven Mile Beach on the aptly named Surf Road, along with the nearby Port Arthur area, just over an hour to the south-east of Hobart. 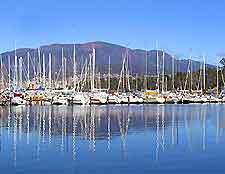 Address: Marieville Esplanade, Sandy Bay, Tasmania (TAS), 7005, Australia
Tel: +61 (0)3 6223 4599
Exploring the Tasmanian coastline by yacht is a great part of any Australian holiday. For information about local events and sailing regattas, or if you simply wish to hire a boat for the day or the week, head on down to Sandy Bay, where the Royal Yacht Club of Tasmania (RYCT) awaits. Yachting highlights include the Sailing South Race Week in January, followed by the Royal Hobart Regatta each February, the Australian Three Peaks Race at the end of March, and the famous Rolex Sydney to Hobart Yacht Race at the end of the year.

Address: 224 Summerleas Road, Kingston, Tasmania (TAS), 7054, Australia
Situated close to the Kingborough Sports Centre and roughly 13 km / 8 miles to the south of central Hobart, the Cheval Equitation Centre is to be found on Summerleas Road. This leading horse riding centre was founded in the middle of the 1970s and comprises in the region of 150 acres / 60 hectares in total.

Also of note and based roughly an hour to the east of Hobart is Horse Riding Tasmania (2526 Arthur Highway, Copping), where rides take in the beautiful coastal scenery of both Five Mile Beach and Seven Mile Beach, with a gourmet Tasmanian Platter and a chilled beer waiting for you upon your return.

Address: 162 Main Road, Moonah, Tasmania (TAS), 7009, Australia
Tel: +61 (0)3 6272 9810
Based within the suburb of Moonah and just under 6 km / 4 miles to the north of the city, the AMF Moonah Tenpin Bowling Centre is best reached by following Elizabeth Street / New Town Road / Main Road. Perfect for families on a wet day, the complex comes with some 24 lanes, a cafe and licensed bar, video games and facilities for functions.
Open hours: daily - from 09:00

Address: 45 Davey Street, Hobart, Tasmania (TAS), 7000, Australia
Tel: +61 (0)3 6231 1781
Located close to Parliament Square and just across from St. David's Park, the Hobart Real Tennis Club is the place to come if you fancy playing a game of 'real' tennis. Interestingly, these are one of only three historic 'real' tennis courts in the Southern Hemisphere. 'Royal' or 'real' tennis is a ancient form of tennis, played in a walled, indoor tennis court. Hobart is known for its rich tennis heritage and over the years, the city has produced a number of local world-class tennis stars. Local parks also offer plenty of outdoor courts, which can be booked where appropriate.

Residing within the Queens Domain park, the recently redeveloped Domain Tennis Centre on Davies Avenue is especially noteworthy, being just a matter of minutes from the Central Business District and boasting almost 20 individual courts (clay, synthetic grass and plexi-cushion). The Moorilla Hobart International professional tennis tournament for women has been held here since 1994 and now offers prize money exceeding $200,000.

If you fancy some beachfront swimming, then both Long Beach at the Lower Sandy Bay and Seven Mile Beach on Surf Road are reliable destinations. Those preferring a pool can choose between any of the following: 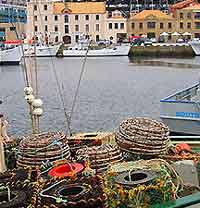 Encircled by the Bass Strait, the Southern Ocean and the Tasman Sea, the coastline of Tasmania is a lengthy one and offers plenty of opportunities for fishing, both off-shore and deep-sea. Close to Hobart, popular fishing spots include the Derwent River, the East Coast Rivers and Arthurs Lake. Based to the west of the city, the Tyenna River lies within the Mount Field area and boasts an especially high concentration of fish. To the east, at Pirates Bay and next to the Eaglehawk Neck area, ocean trips offer the chance to catch prized southern bluefin tuna between April and June.

Those wishing to let off steam may like to consider a trip to the neighbouring Glenorchy Mountain Bike Park. This course has played host to the prestigious Australian National Series and is to be found just 15 minutes from central Hobart, being reached via the Brooker Highway and Elwick Road, and close to Tolosa Park.