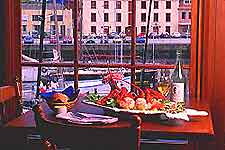 Seafood is the speciality on the island of Tasmania and Hobart is no exception, with numerous seafood restaurants located in and around the city centre. Hobart has a large number of dining opportunities and although the choice of cuisine doesn't quite compare to some of Australia's larger state capitals, the tucker found here is definitely becoming more cosmopolitan, with new eateries regularly opening.

The majority of restaurants are generally concentrated in the city centre and along the Elizabeth Street strip in North Hobart, where you will find the greatest diversity. Seafood is caught daily by fishing boats at the Victoria Docks, and so chefs don't have far to travel to buy the freshest fish, lobsters, prawns and squid.

Popular areas for dining in Hobart include Battery Point, which boasts a village atmosphere with upmarket food and generous portions. Those on Brook Street will find that gourmet food is in good supply, while Collins Street features some top Italian restaurants, Asian dining and takeaway outlets. 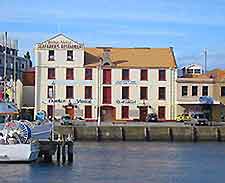 Harrington Street has become known for its home-style Italian cooking and other themed eateries, while Liverpool Street features a particularly popular Cambodian restaurant, along with a series of friendly coffee shops and cafés.

Murray Street is where you will find a good selection of bakeries and cafés with al fresco seating, with the Salamanca district featuring Asian, Vietnamese and Japanese restaurants with further outside dining areas. At the Victoria Docks, several seafood eateries serve up the catch of the day, with specials boards often placed in the window or by the front door.

The wine lists presented at most restaurants in Tasmania are predominantly made up of Australian wines. Tasmanian wines have gained quite a reputation over the years and deservedly so, with local vineyards based around the Coal River, the East Coast, Pipers River, Tamar Valley and the Derwent Valley, which is located part-way between Hobart and the small town of Hamilton.

Modern Australian cuisine tends to be fairly simple and not overly fussy, with strong flavours and quality ingredients. Many beachfront restaurants serve quick eats, such as potato wedges and sour cream, pie floaters (a meat pie in a thick pea soup), sangers / sandos (sandwiches) and various seafood dishes. Those who fancy battered fish and chips will often find that the fish in question is actually a chunk of shark meat, known as 'flake'.

Of course, barbecues (barbies) are especially famous in Australia and many restaurants around Hobart will serve up barbecued steaks, with kangaroo, emu and ostrich steaks often a possibility for the more adventurous of diner. Rock lobsters, crabs and prawns regularly make an appearance on Aussie dining menus, along with salads, hamburgers, Neapolitan-style pizzas and various Chinese-inspired dishes.