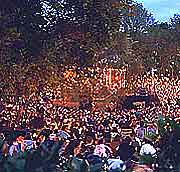 Hobart is a lively city with many well-supported annual events, meaning that it may well make sense to plan a visit to coincide with some festivals.

The choice of things to do will vary greatly depending upon the season, with the Taste Festival both ending and starting the year, with its New Year's Eve waterfront party, week-long food and wine events, cooking classes and special 'Taste Plate' lunches at many participating restaurants within the Sullivans Cove precinct. In total, more than half a million people attend the various Taste events.

Another major happening at the beginning of the year in Hobart is Mona Foma, which serves as the biggest contemporary music festival in Tasmania.