Getting Around, Hobart Travel, Transport and Car Rental 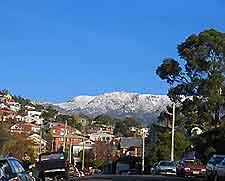 The public transport system in Hobart consists of an excellent bus network, known as the Hobart Metro. Other travel options in and around Hobart include regular ferries departing from Hobart's Brooke Street Pier, and an organised grid-style arrangement of roads.

Hobart has good connections throughout the island of Tasmania and Hobart is located near to many interesting suburbs, towns, national parks and mountain regions. Renting a car is often the preferred method of transport for excursions outside of Hobart and most places in Tasmania can be reached in less than three or four hours by car. There are several major roads located on the outskirts of Hobart, which offer fast and convenient routes when travelling both to and from Hobart.

Hobart is home to the largest airport in Tasmania and Hobart Airport (HBA) is located just 17 km / 10.5 miles from central Hobart. This important, busy airport deals with large numbers of passengers throughout the year and Hobart Airport has good general airport facilities.

The district of Hobart is served by a number of major roads and highways. Road access to Hobart is excellent and renting a car provides an easy way to travel to many of the finest features outside of Hobart, such as Tasmania's splendid national parks, remote beaches and scrubland areas, nature reserves, small towns and impressive mountains.

Travel by car in Hobart city centre can be difficult, as much of central Hobart is one-way only. If you are heading for a specific location, it is always worth referring to a map and carefully planning your journey first. Although Hobart's controlled central traffic system is confusing as first, it soon becomes easy to understand.

Traffic in Hobart can also be heavy during the busy commuting hours (07:30 to 10:00 and 16:00 to 18:00), so travelling by car outside of these peak hours in the centre of Hobart is sensible. There are numerous parking garages available in central Hobart, parking areas at Hobart's hotels and guesthouses, and some on-street parking spaces are also available in the centre of Hobart.

Buses in Hobart are operated by the Hobart Metro and the main office is situated at 9 Elizabeth Street, inside the Post Office building, where you can obtain bus timetables and bus route maps. Most buses in Hobart depart from outside of Hobart's Post Office, which has become known as the Metro City Bus Station. Other regular pickup points for buses in Hobart are around Franklin Square and throughout Hobart city centre.

Hobart's convenient bus network is a useful way to travel to more distant points of interest and the 'Metro Tens', a pack of ten discounted tickets, provide a good way to save money on Hobart's buses. 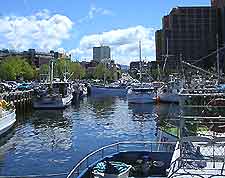 A weekday peak-hour ferry service travels to Bellerive, on the eastern shore of Hobart, from Brooke Street Pier. This ferry service operates at 90 minute intervals between 10:30 to 15:00 and is a relaxing way to travel around Hobart.

The round trip is fairly inexpensive and you are able to get on and off as many times as you wish. There are also a number of sightseeing cruise options that depart from Hobart's Brooke Street Pier.

Hobart is well pedestrianised and one of the most popular ways to travel around Hobart's compact city centre is by foot. Walking around Hobart is a good way to see some of Hobart's numerous tourist attractions, museums, galleries and landmarks up close. Finding your way around central Hobart is very straightforward and many of Hobart's most famous sights and attractions are near to each other.

Bicycles are a particularly popular way to travel around many of the recreational areas of Hobart and Tasmania. Much of central Hobart is fairly very flat, although some of the outskirts and more mountainous regions quickly become hilly. There are also countless cycle trails in Hobart, such as cycle paths that follow the Derwent River and coastal areas of Hobart.