Brisbane Weather, When to Go and Climate Information

The wonderful, Mediterranean-style climate in Brisbane provides distinct seasons, together with year-round sunshine. Most rain tends to fall during the winter and spring months, while the summer months of December, January and February are particularly hot, with consistent fine weather, although there may be an occasional downpour at this time of the year.

During the autumn months of March, April and May, the climate is particularly attractive and this is one of the most popular times of the year to visit Brisbane, with fine days, mild nights and generally very pleasant weather. Spring is from September to November and whilst there is more chance of rain at this time of the year, the sunshine usually reappears fairly quickly.


Average summer temperatures in Brisbane are around 25°C (77°F), although with extremely sunny weather, these temperatures can exceed 40°C (104°F). Brisbane generally enjoys an average of more than eight hours of sunshine every day of the year, making it one of the most popular holiday destinations in the world.

The sunny city of Brisbane is comfortable and pleasant to visit at any time and is almost always filled with glorious sunshine. However, in recent years, the city has suffered with severe drought spells, when water-use has been restricted.

The following are the normal daily temperature ranges for Brisbane: 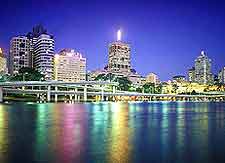