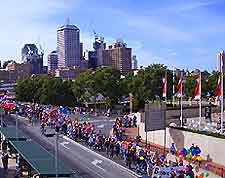 The gay scene in Brisbane is an established one, with a number of fun bars and nightclubs to tempt in the punters, along with bathhouses, saunas and gyms on roads such as Jeays Street (Bowen Hills) and Peel Street (West End).

Much of the LGBT activity tends to be centred around the West End, Woolloongabba, Spring Hill, Fortitude Valley and New Farm areas of the city. Also of note, there are a variety of restaurants and cafés within the vicinity of Boundary Street and Hargrave Road at West End, and along Brunswick Street, where patrons of all persuasions are welcomed into a friendly non-discriminatory atmosphere.

Those looking for a memorable gay nightspot won't go far wrong paying a visit to the Beat Megaclub on Ann Street, within the Fortitude Valley neighbourhood of Brisbane. Open every day throughout the week until 05:00 in the morning (no admittance after 03:00 due to state laws), the Beat Megaclub features regular DJ sets and an undeniable party vibe.


Located within the Spring Hill area, close to central Brisbane, the Sportsman Hotel resides on Leichhardt Street and advertises itself as being a 'gay owned and operated hotel'. Opened in 1990 and conveniently situated close to the railway station, the Sportsman features club and lounge bars, where entertainment comes in the form of the CWC cabaret (Citizens Welfare Committee), drag queen performances, 'superquiz' nights, superstar karaoke and themed party nights.

Another popular haunt of the local Brisbane gay community is the Wickham Hotel on Wickham Street, within the Fortitude Valley area. Here, live entertainment comes in the form of karaoke, DJ nights in the dance bar, fun drag shows, and music performed by local singer-songwriters, while there is also a gaming room. 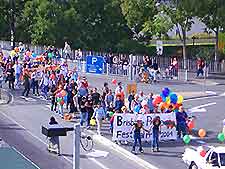 The highlight of the gay and lesbian year in Brisbane is the city's Pride Festival, which is held in September each year and generally lasts the entire month.

With its origins in the year 1990, the pride festival of today regularly attracts more than 25,000 people and features a host of entertainment, games, market stalls, live music, parades, carnivals, amazing costumes, exhibitions and lots of partying.

Other LGBT gay and lesbian events in Brisbane include: