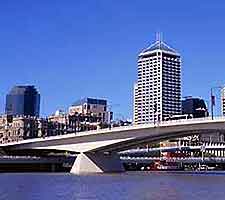 As with other sizeable cities in Australia, Brisbane comes with much in the way of accommodation, although the majority of hotels are to be found outside of the Central Business District (CBD). The most desirable hotels in the city are those close to the attractions and shops, often offering appealing views of the cityscape, the coastline and the Brisbane River.

Many of the city's hotels are particularly concentrated around central Brisbane, Spring Hill - to the north of the city centre, Petrie Terrace - on the western side of the city, Fortitude Valley and New Farm - to the north-east, and the West End District on the southerly side of the city. If you intend to visit many of the city's top tourist attractions and landmarks, then hotels within central Brisbane are certainly the best option. The outlying suburbs tend to be preferred by families looking for recreational parks, with the guest houses and accommodation around the northerly districts of Arana Hills and Everton Hills being within easy reach of the Bunyaville State Forest Park.


Hotels in central Brisbane usually drop their rates at the weekends, as business travellers form a large percentage part of their business between Monday to Friday. The busiest tourist season is during the summer months, which in Australia fall between December to February.

Many visitors to Brisbane look for accommodation within the pleasant inner suburbs, such as Paddington and the Petrie Terrace, on the western side of the city centre. Lying on the north-eastern side of central Brisbane, hotels within the Fortitude Valley are based around the resident Chinatown. Located on the northern side of the city's Central Business District is Spring Hill, which is pleasant and generally very quiet, while the West End of Brisbane, on the southerly banks of the river, is widely known for its plentiful hotels, superb restaurants and laid-back atmosphere.

For motels and similar cheap chain accommodation in Brisbane, look along Gregory Terrace and Wickham Street, both of which reside on the northerly side of the city. Main Street, within the Kangaroo Point area, is another good place to look for affordable hotels and connects the famous southern Gold Coast Highway.