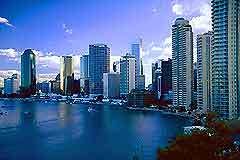 Brisbane is divided up into various neighbourhoods, locations, districts and areas of interest, full of many top tourist attractions, major landmarks, historic buildings, restaurants and viewpoints.

The main neighbourhoods and districts are often divided by the Brisbane River, which runs through the heart of the city, and includes the following areas.

Brisbane City Centre and the Central Business District (CBD) include many important and historic Victorian buildings, contrasting with hi-tech, hi-rise office blocks and skyscrapers. Laid out in an orderly gridwork of roads, some of the most interesting tourist attractions in Brisbane City Centre include Brisbane City Hall, the Treasury Building, Parliament House and the City Botanic Gardens. The former docks area is situated to the north-east of Brisbane's Central Business District (CBD) and has become one of the most attractive and exciting areas in Brisbane city centre. 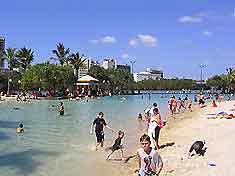 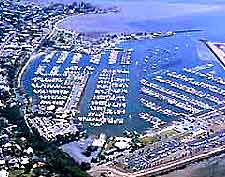 The Manly neighbourhood in Brisbane is situated to the south-east of central Brisbane and is an attractive, harbourside area. Manly is full of maritime history and has a strong nautical past, being the home to many local sailors in Brisbane. Attractions in Brisbane's Manly district include Manly Boat Harbour, the Esplanade and the Cambridge Parade, which is lined with gift shops, charming cafés and lively bars. 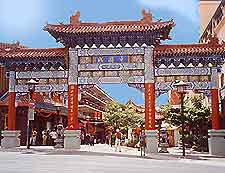 Named after the HMS Fortitude, which sailed along the Brisbane River in the mid-19th century, Brisbane's Fortitude Valley area is a popular area of Brisbane. Highlights in the Fortitude Valley area of Brisbane include Brunswick Street Mall - an attractive shopping arcade which is full of street cafés, McWhirter's Markets - at the Wickham Street end of the shopping mall and Brisbane's small Chinatown district, which is filled with an exceptional selection of authentic Chinese and Cantonese restaurants.

The Milton, Paddington, Rosalie and Spring Hill districts of Brisbane have much to offer tourists, including large concentrations of hotels, popular restaurants and cafés, enormous parklands, galleries and renovated, Victorian houses. These leafy regions of Brisbane are a gentle transition from Brisbane's built-up city centre to the surrounding countryside and bushland areas.

Peel Island is one of Brisbane's numerous Moreton Bay islands and is a popular region for scuba diving, with an impressive coral reef, rich in sealife. Brisbane's Peel Island is within easy reach of central Brisbane by boat and has its own harbour area.

St. Helena Island is a large national park with a popular nature reserve and thriving ecology. Close to Brisbane's Waterloo Bay and Bramble Bay, St. Helena Island is where the first prison in the whole of Queensland was introduced during the 19th century.

Cleveland is close to Brisbane's Peel Island and also the larger North Stradbroke Island. Featuring a number of interesting attractions, such as Clevedon Point, complete with tall lighthouse, the enormous Tingalpa Reservoir and the scenic Raby Bay, other attractions nearby Cleveland include Capalaba and Wellington Point.