Getting Around, Brisbane Travel, Transport and Car Rental 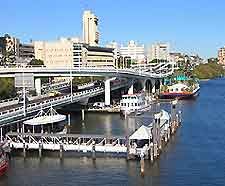 Brisbane, in Queensland, is well served by a public transport system and is home to an excellent network of buses and trains, providing links to much of Australia. The city of Brisbane is located close to many other interesting villages, towns and cities, such as Woolloongabba, Greenslopes and Moorooka to the south, and Bracken Ridge to the north.

Many tourists visiting Brisbane also travel outside of the city, into the many suburbs, including areas of the stunning Gold Coast, such as Surfers Paradise, Broadbeach, Burleigh Heads, Coolangatta, Sringbrook Plateau, Canungra and Mount Lindesay Highway.

Visitors will find that Brisbane's reliable and convenient public transportation system is an ideal and affordable way to visit local points of interest.


Brisbane has plenty of car parking options and finding places to leave your car is not difficult, with free two-hour parking on many streets. However, driving in Brisbane city centre can be a little confusing at times, as some of the roads are one-way only and street signs are frequently not prominently positioned.

Many visitors to Brisbane also travel outside of the city and renting a car is the most popular way to reach your destination. There are five major routes in and out of the Brisbane metropolitan area and these are numbered from M1 to M5. Connecting to the Pacific Highway to the south and Bruce Highway to the north, these fast roads offer speedy and convenient routes.

Brisbane is served by Brisbane Airport (BNE), the largest airport in Queensland. 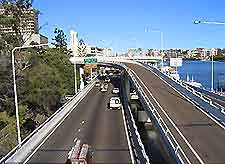 Renting a car can be a particularly economical way to travel around the Brisbane area, with many firms offering discounts for car rentals of three days or more. Major car rental companies here include Advantage Rent-a-Car, Avis, Budget, Hertz, National and Thrifty Car Rental.

The extensive bus network in Brisbane includes the Busway, a network of bus-only roads that travel between the southern suburbs and the South Bank district. Myer Centre is the main bus stop, with regular buses travelling throughout Brisbane. Other buses are readily available from major bus stops at Adelaide Street, between George Street and Edward Street, at the City Plaza, Anzac Square, Riverside and the Queen Street Shopping Mall.

Most buses in Brisbane travel every 10 to 20 minutes, Monday to Friday, until around 18:00 and also on Saturday mornings. Bus services tend to be less frequent on Saturday and Sunday afternoons and evenings, stopping at 19:00 on Sunday, around midnight each Friday and Saturday, and during the week at 23:00.

Coaches in the Brisbane and the Queensland area travel further afield, to nearby suburbs, towns and cities. Regional coaches are an affordable and relaxing way to travel outside of the city.

Ferries travel regularly every day across the Brisbane River, between 05:50 to 22:30. Known as the CityCats, these speedy blue catamarans connect the University of Queensland in the west, to Bretts Wharf in the east, stopping at North Quay, South Bank, Riverside and New Farm Park.

The main train terminal in Brisbane is the Transit Centre, operated by the Citytrain network Situated in Roma Street, in central Brisbane, the Transit Centre is close to most hotels. There are fast and inexpensive trains that travel to Robina on the Gold Coast between 04:00 to 23:00, every 30 minutes for most of the day. Other regular trains from the Transit Centre travel to Surfers Paradise, Southport districts and nearby coastal destinations, as well as many major areas throughout Queensland and Australia, including Nambour, Coolroy, Gympie, Nerang, Robina, Rosewood, Cleveland and the North Stradbroke Island ferry. Most trains in Brisbane and Queensland are modern, electric, clean and full air-conditioned. Bicycles are permitted on trains during off-peak times and at the weekends.

Taxis in Brisbane are an economic option for shorter journeys and local taxicabs travel all over the centre and suburban areas. Most taxis in Queensland can be hailed on the road, while in Brisbane, you can simply head to one of the central taxi ranks, such as the Transit Centre and at the top end of Edward Street. The main taxi companies that operate here are the Yellow Cab Company, Brisbane Cabs and also Black and White taxis.

Bicycles are a particularly popular way to get around many of the recreational areas of Brisbane and Queensland. The city council's Safe Bikeways brochure is available from tourist information outlets. Wearing a bicycle helmet is required by law, and carrying drinking water at all times is advisable when cycling in this hot and sunny Australian city.