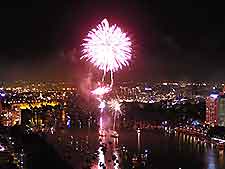 The city of Brisbane has much to shout about when it comes to the world of festivals and culture, with an ever-expanding live music scene and regular concerts staged at the South Bank. This is where you will find the Queensland Performing Arts Centre, as well as the Brisbane Convention and Exhibition Centre.

Many of the city's principal events are held at the South Bank Parklands, including the major Australia Day festivities and the Riverfestival, the latter of which began its life in 1998 and lasts for an entire week in September, being merged with the activities of the Brisbane Festival in 2009. A significant part of the Riverfestival is the beautifully choreographed fireworks display named the Riverfire, drawing some 500,000 spectators. A further fireworks extravaganza takes place at the South Bank Parklands each year, as part of the city's huge New Year's Eve celebrations.

Many exciting sporting events are staged at the Brisbane Exhibition Ground within the Bowen Hills suburb, which also goes by the name of the RNA Showgrounds and regularly hosts Australian Baseball League games. The annual agricultural show named Ekka is also based here each August, being first held in 1876 and now lasting for some ten days, when over 600,000 visitors come to enjoy the animal processions, the equestrian displays, the agricultural events and exhibitions, and the family fairground rides.