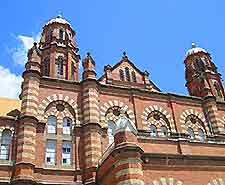 Providing an appealing alternative to the surrounding beaches and coastline, the museums of Brisbane are extremely varied and appealing, covering subject matters such as anthropology, archaeology, folklore, maritime heritage, the military, the railway, the performing arts, the police force and zoology.

Especially important in Brisbane is the Queensland Museum, which was established in 1862 and is a part of the renowned Queensland Cultural Centre. Themed exhibits here include everything from spiders, snakes and endangered wildlife, to information about past residents, the record-breaking Avian Cirrus plane used to fly between England and Australia in 1928, and fossils of the dinosaurs of ancient Queensland - including an actual Muttaburrasaurus skeleton.

Another very noteworthy attraction is the Queensland Maritime Museum, which stands alongside the Brisbane River and is sited on the southerly side of the South Bank Parklands. The main collections here are categorised as the dry dock, engines, lighthouses, navigation and ship models. 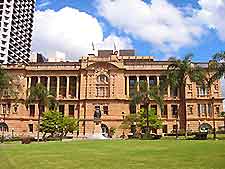 Address: Melbourne Street, South Bank, Brisbane, Queensland (QLD), 4101, Australia
Tel: +61 (0)7 3840 7555
The Queensland Museum, in the South Bank area, is sited close to the Performing Arts Centre, the Victoria Bridge and the Queensland Conservatorium Griffith University, amongst other attractions. Highlights here include an extensive natural history section with some enormous displays - such as the impressive collection of dinosaurs skeletons and fossils, and a large section concentrating on the folk history of Australia's indigenous people and early settlers. Visitors may also like to check out the interactive fun at the Sciencentre, the onsite café area, the well-stocked gift shop and the many hands-on displays, which are particularly popular with children.
Open hours: daily - 09:30 to 17:00
Admission: free

Address: Michie Building, University of Queensland, Saint Lucia, Brisbane, Queensland (QLD), 4072, Australia
Tel: +61 (0)7 3365 2674
The Anthropology Museum is located to the west of central Brisbane and is dedicated to the early inhabitants and cultures of Australia's native inhabitants. With an enormous number of artefacts, archaeological finds and historic displays, this notable attraction is part of the University of Queensland complex, standing within the Michie Building, and also features some impressive exhibits from other areas of the world.
Open hours: Tuesday to Thursday - 11:00 to 15:00, closed during holidays
Admission: free 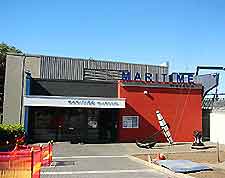 Address: 3049 Gold Coast Highway, Surfers Paradise, Gold Coast, Queensland (QLD), 4217, Australia
Tel: +61 (0)7 5538 3975
The Wax Museum is filled with realistic waxworks of famous people and major celebrities from around the world. Located just over 75 km / 47 miles to the south of the city and within the famous Surfer's Paradise area of the Gold Coast, close to the Nerang River, specific highlight's include pop stars, American presidents, fantasy figures and mythical characters. Visitors will also enjoy the spine-chilling exhibits in the Chamber of Horrors.
Open hours: daily - 10:00 to 22:00
Admission: charge, discounts available for children and seniors

Abbey Museum of Art and Archaeology

Address: Old Toorbul Point Road, Caboolture, Sunshine Coast, Queensland (QLD), 4510, Australia
Tel: +61 (0)7 5495 1652
The Abbey Museum of Art and Archaeology is filled with a diverse collection of historic items from around the world, many of which date back literally thousands of years. Located within the suburb of Caboolture and along the Sunshine Coast, approximately 50 km / 30 miles to the north of the city, notable attractions include a number of exciting seasonal events, fascinating exhibits and interactive displays. Look out for the collections of medieval pottery originating from the Netherlands, the limestone relief from the 12th century and the prehistoric bones.
Open hours: Tuesday to Saturday - 10:00 to 16:00
Admission: charge, discounts available for children, families and seniors

Address: New England Highway, Crows Nest, Queensland (QLD), 4355, Australia
Tel: +61 (0)7 4698 1776
Located in the neighbouring town of Crows Nest, which stands just a short distance to the west of Brisbane, the open-air Carbethon Folk Museum and Historical Village contains a large collection of local historic artefacts. With a number of fascinating exhibits, such as early examples of medicine and surgery, other attractions here include clothing, building tools and farming equipment. As you enter the village, you will feel as if you are walking back in time, with the late 19th-century 'Carbethon' home forming the centrepiece, being surrounded by many additional buildings, such as the Aurora studio, the blacksmith shop, granny's store, the machinery shed, the printery, the skillion and an Aboriginal display. There is also an covered picnic shed and small playground area with swings.
Open hours: Thursday - 10:00 to 17:00, Sunday - 12:00 to 17:00
Admission: charge

Address: 22 Mowbray Terrace, East Brisbane, Brisbane, Queensland (QLD), 4169, Australia
Tel: +61 (0)7 3393 0111
East Brisbane's Mowbraytown Museum and Photographic Gallery was founded in the late 20th century. Housing an interesting and important record of local history, other attractions at the Mowbraytown include a number of temporary exhibitions and seasonal events throughout the calendar.
Open hours: Monday to Friday - 09:00 to 17:00
Admission: free

Address: Police Headquarters, Media and Public Relations Branch, 100 Roma Street, Brisbane, Queensland (QLD), 4000, Australia
Tel: +61 (0)7 3364 6425
The Queensland Police Museum stands in the centre of Brisbane, close to many popular tourist attractions. Dedicated to the history of the police force in the state, this attraction features vast amounts of historic artefacts and police memorabilia, with displays showing how the uniforms have changed through the years, early police weapons and many important police-related documents.
Open hours: Monday to Friday - 09:00 to 16:00
Admission: free

Address: Smith Street, Cleveland, Brisbane, Queensland (QLD), 4163, Australia
Tel: +61 (0)7 3286 3494
The Redland Museum stands in the easterly suburb of Cleveland, next to Raby Bay and Thomlands, and is dedicated to the history and culture of the region. Full of interesting local artefacts, important memorabilia, historic farming equipment, traditional clothes and antique furniture, other attractions at the Redland include a gift shop and exciting seasonal celebrations.
Open hours: Friday and Saturday - 13:00 to 15:00, Sunday - 11:00 to 16:00
Admission: charge, discounts available for children and seniors

Address: Victoria Army Barracks, Petrie Terrace, Brisbane, Queensland (QLD), 4000, Australia
Tel: +61 (0)7 3233 4296
The Victoria Barracks Military Museum can be found along Petrie Terrace, in the city centre, and specialises in the history of the Australian military. Housed in the original Victoria Army Barracks, which were built in the 1860s, this cultural attraction is filled with interesting artefacts, uniforms, exhibits and impressive militaria collections.
Open hours: second Sunday of the month - 11:30 to 16:30
Admission: free

Address: Department of Zoology, University of Queensland, Saint Lucia, Brisbane, Queensland (QLD), 4072, Australia
Tel: +61 (0)7 3365 2474
Located on the southwesterly side of the city and within the St. Lucia suburb, the Zoology Museum is part of the University of Queensland campus and is dedicated to natural history, featuring some enormous collections of animal specimens, fossils and plants. Other attractions include interactive displays, seasonal exhibits, lectures and regular guided tours.
Open hours: Monday to Friday - 09:00 to 16:00
Admission: free

Address: Freeman Road, Kunkala, Rosewood, Queensland (QLD), 4074, Australia
Tel: +61 (0)7 3371 4231
Standing on the western outskirts of the city, just beyond Ipswich, the Rosewood Railway Museum remembers the history of the railroad in the Queensland area. Home to a number of lovingly restored steam locomotives and historic trains, visitors will also be pleased to find a gift shop, café area, guided tours, regular train rides and many seasonal railway related events.
Open hours: every other Sunday - 09:00 to 14:00
Admission: charge, discounts available for children