Brisbane Beaches, the Gold Coast and the Sunshine Coast 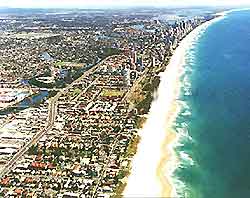 The stunning beaches of Queensland definitely add a further dimension to any holiday spent in the city of Brisbane. Many of these beaches are just a short drive away from the city centre and come with a choice of appealing water sports, such as surfing and windsurfing, as well as snorkelling and scuba diving. Particularly notable are those sandy expanses within the Noosa National Park and around the Alexandra Headland.

Lying on the northern side of Brisbane are some of Australia's finest beaches, lining the famous Sunshine Coast, which stretches for over 70 km / 44 miles, between Noosa and Bribie Island. To the south is the equally impressive Gold Coast, measuring in at some 35 km / 22 miles and sandwiched in between the border of New South Wales and the aptly named Surfers' Paradise.

The busiest beaches often come with volunteer lifeguards, particularly at the weekend, as well as barbecue areas, picnic tables and seafood restaurants. Shark sightings are uncommon and the most popular and vulnerable of Queensland's beaches feature shark nets to protect swimmers where necessary, including those along the Gold Coast.

The main central beaches are in the following order, from north to south:

Address: Flinders Parade, Sandgate, Brisbane, Queensland (QLD), 4107, Australia
Tel: +61 (0)7 3221 8411
Sandgate Beach resides on the northern side of the city and has become something of a traditional seaside resort, with a choice of walking trails, shops and cafés. The Boondall Wetlands Park, the Brisbane Entertainment Center, the Deagon Wetlands and the Third Lagoon Reserve are all within close proximity, while the Tinchi Tamba Reserve Wetlands and the Deep Water Bend Reserve are just a short drive to the north-west.

Address: Fortitude Street, Brisbane, Queensland (QLD), 4014, Australia
Tel: +61 (0)7 3267 7811
The scenic Nudgee Beach lies alongside Moreton Bay and remains an especially lively location. Many related activities are possible here, with swimming being especially popular, along with trails suitable for cycling, walking and jogging. An adjacent nature reserve contains a wealth of native wildlife and provides an additional attraction, while the Baydogs Sea Kayaking Adventures centre provides a useful place to hire sea kayaks and explore the coastline. 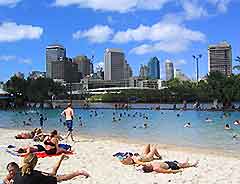 The Sunshine Coast beaches are in the following order, from north to south:

Address: Sunshine Coast, Queensland (QLD), Australia
Tel: +61 (0)7 5479 1566
The Noosa National Park is home to a series of classic right-hand breaks, creating large waves and strong currents. This area of the Sunshine Coast has exceptional waves and is one of the most popular locations nearby Brisbane for surfing. There are many charming bays and secluded spots here, suitable for sunbathing.

Address: David Low Way, Sunshine Coast, Queensland (QLD), 4573, Australia
Tel: +61 (0)7 5479 1566
Coolum Beach is one of the most spectacular stretches on the Sunshine Coast and is a fairly undeveloped area, within comfortable driving distance of the city. Popular with families and young children, the exceptional beachfront facilities are accompanied by areas suitable for sunbathing, swimming and playing ball games. Attractions nearby include numerous shops, cafés and coastal walks.

Address: Aerodrome Road, Sunshine Coast, Queensland (QLD), Australia
Tel: +61 (0)7 5479 1566
Located roughly 100 km / 62 miles to the north of Brisbane, Maroochydore Beach lies within the Maroochy area of the Sunshine Coast, where it is called home by a golden beach, good surfing and some excellent restaurants and nightclubs. There are also a number of large high-rise hotels and apartments around Maroochy, making this a popular seaside resort. Neighbouring attractions include the Maroochy Surf Club, the Cotton Tree Holiday Park and the Boat Shed restaurant, which opened in the year of 1997 and specialises in all kinds of seafood.

Address: Melrose Parade, Maroochydore, Sunshine Coast, Queensland (QLD), 4558, Australia
Tel: +61 (0)7 5479 1566
Mooloolaba is a particularly secluded and sheltered beach, with golden sand and clear blue waters. Located roughly an hour and a half to the north of Brisbane, this stretch is suitable for swimming, snorkelling and fishing. Underwater World, the Mooloolaba Holiday Park, Offshore Reef Fishing and the nearby Beacon Lighthouse Reserve all reside in this area, along with numerous beachfront eateries and bars, such as the Surf Club. Of note, jet skis are available for hire next to the Wharf Tavern.

The Gold Coast beaches are in the following order, from north to south:

Address: Seaworld Drive, Southport, Gold Coast, Queensland (QLD), Australia
Tel: +61 (0)7 5538 4419
Main Beach, at the top of the Australian Gold Coast, is situated in nearby Southport, being roughly an hour's drive from the city of Brisbane and to the south-east. This large coastal resort is sheltered by the sandbar known as the Spit. It tends to be a quieter spot than nearby Surfers' Paradise, with the large Australian Fair Shopping Centre on Scarborough Street serving as the heart of the Southport region. Next-door, Hollingdale Park, Philip Park and the Sea World Resort provide further appeal, along with nearby Doug Jennings Park and the popular Get Wet Surf School. 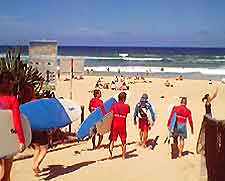 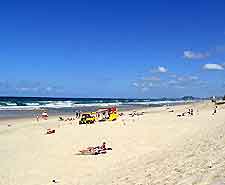 Address: Old Burleigh Road, Broadbeach, Gold Coast, Queensland (QLD), 4281, Australia
Tel: +61 (0)7 5538 4419
Broadbeach is situated between Surfers' Paradise and Burleigh Heads, to the south of Brisbane and alongside MacIntosh Island. Most famous for its enormous casino complex, the Conrad Jupiters Casino, which was the first legal casino in Queensland and features more than 100 gaming tables, Broadbeach is also home to a monorail train and shopping centres, and during the year plays host to a number of large surfing competitions.