Family attractions are certainly in abundance around the city of Brisbane, with the beaches located along the neighbouring Gold Coast and Sunshine Coast being especially suitable for children, as well as water sports enthusiasts. Playgrounds may suffice if you are simply looking for something to fill an hour or two, with those at Peace Park and Marchant Park being especially popular.

The Alma Park Zoo, on the northern outskirts of Brisbane, is well worth looking out for and is based within the Dakabin area, being a little under 40 minutes from the city centre and connected by regular trains and free buses. Also in this direction is the sizeable Australia Zoo and its famous collection of crocodiles.

To the south and on the Gold Coast, the rollercoaster and funfair-style attractions at the Warner Bros. Movie World will be sure to please children of any age, as will the marine creatures living at Sea World, and the multitude of slides and pools at the Wet 'n' Wild Water World in the suburb of Oxenford. 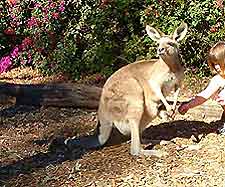 Address: Alma Road, Dakabin, Queensland (QLD), 4503, Australia
Tel: +61 (0)7 3204 6566
With red pandas, pygmy marmosets, black-capped capuchins, ring-tailed lemurs, spider monkeys, sacred baboons, kangaroos, koalas, emus, dingos, wombats, cassowaries, feeding talks and demonstrations, seating, a gift shop and a café, the Alma Park Zoo may not be on a grand scale, but is a good-size and began its life in the late sixties as a basic sanctuary for native Aussie animals. The Ranger Talks are worth looking out for and offer the chance to touch and stroke creatures such as crocodiles and snakes.
Open hours: daily - 09:00 to 17:00
Admission: charge, discounts available for children

Address: Amazons Place, Jindalee, Brisbane, Queensland (QLD), 4074, Australia
Tel: +61 (0)7 3376 7555
Recently upgraded, the Amazons Aquatic Adventureland features fun water slides and flumes, along with some playground areas, a food court and picnic facilities. The gift shop is of a good size and offers a choice of beachwear, clothing and jewellery. Close by and possibly of interest is the riverside Amazon Place Park, the Jindalee Bowls Club and the Jindalee Golf Club, as well as various shops and eateries.
Open hours: summer, daily - 10:00 to 17:00
Admission: charge, discounts available for children and families 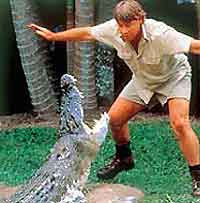 Address: Glass House Mountains Tourist Route, Beerwah, Queensland (QLD), 4519, Australia
Tel: +61 (0)7 5494 1134
Australia Zoo is to be found approximately one hour to the north of Brisbane, just past Beerburrum, where it is home to a large number of indigenous Australian animals of all kinds. Attractions at these extensive zoological gardens include kangaroos, wallabies, koalas, ferocious crocodiles, snakes, reptiles and spiders, as well as informative keeper talks. The zoo is conveniently nearby the Beerwah train station and was founded in 1970 by Australia's world-famous crocodile hunter and television wildlife celebrity, the late Steve Irwin. Visitors are encouraged to participate in the feeding demonstrations of crocodiles and elephants. Themed exhibits are named the Crocoseum, Elephantasia, the Tiger Temple, and Africa, where a replica of the Serengeti includes giraffes, rhinos and zebras. The walk-through Rainforest Aviary is another draw, with its wealth of native birds.
Open hours: daily - 08:30 to 16:00
Admission: charge, discounts available for children, families and seniors 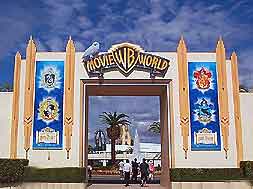 Address: Pacific Highway, Oxenford, Queensland (QLD), 4210, Australia
Tel: +61 (0)7 5573 8485
Located on the Gold Coast, the Warner Brothers Movie World is a popular excursion and without doubt one of the most outstanding attractions for families on holiday in Queensland. This exciting theme park opened in 1991 and is generally referred to as simply Movie World. Day trippers will find several rollercoasters and rides, carousels, live-action shows and seasonal events. Particularly noteworthy is the Green Lantern Coaster, the Lethal Weapon Ride, the Road Runner Rollercoaster, the Scooby Doo Spooky Coaster and the Wild West Falls Adventure Ride, which is an exciting log flume ride comprising a ghost town, geysers and some dark mine shafts. The Superman Escape always attracts long queues and this accelerator coaster reaches speeds of 100 kmph / 62 mph in just two seconds.
Open hours: daily - 09:30 to 17:30
Admission: charge, discounts available for children and seniors, children four years old and under are free 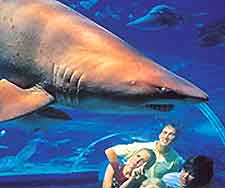 Address: The Wharf, Parkyn Parade, Mooloolaba, Queensland (QLD), 4557, Australia
Tel: +61 (0)7 5444 8488
Situated on Queensland's Sunshine Coast, Mooloolaba Underwater World is a leading family attraction, although at around an hour and a half to the north of the city, it is a fair distance for a day out. This large complex incorporates an oceanarium and a wildlife sanctuary, together with a marine mammal park. Seals, large sharks, rays, landscaped aquariums, themed rides, feeding demonstrations and a gift shop are all here. The large tunnel through 'Sharks Alive' offers uninterrupted views of the tank's residents, via a moving walkway. There are also some freshwater crocodiles, a preserved giant squid and a big collection of crabs, named 'Crawly Creatures'.
Open hours: daily - 09:00 to 18:00
Admission: charge, discounts available for children, families and seniors, children three years old and under are free

Address: 110 George Street, Brisbane, Queensland (QLD), 4100, Australia
Tel: +61 (0)7 3220 0166
The centrally located Queensland Sciencentre is part of the Queensland Museum South Bank and has just enjoyed considerable renovation work, in time for the 150-year anniversary celebrations. Overflowing with fascinating displays, the centre features many hands-on activities for children and lots of impressive scientific exhibits. Do bear in mind that the Sciencentre can become extremely crowded at the weekend, particularly on a rainy day.
Open hours: daily - 10:00 to 17:00
Admission: charge, discounts available for children, families and seniors, children five years old and under are free 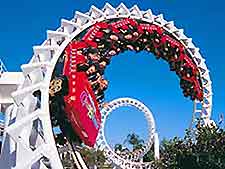 Address: Sea World Drive, Main Beach, Southport, Queensland (QLD), 4217, Australia
Tel: +61 (0)7 5588 2205
The exciting attractions of Sea World can be found on Main Beach, a little more than an hour to the south and next to Queensland's Gold Coast. Featuring an enormous collection of sealife, including sharks, dolphins, stingrays, penguins and colourful fish, Sea World officially opened in 1971, although was initially established in 1958 as the Surfers Paradise Ski Gardens. As well as the plentiful marine creatures, there are also themed rollercoasters, stunt shows, documentaries and a play area with a host of climbing equipment, named Castaway Bay. Further attractions come in the form of the Dolphin Nursery Pool, the Penguin Encounter, the Seabird Rehabilitation Aviary, Shark Bay and the Polar Bear Shores, which ranks as the only Polar bear exhibit within the whole of Australia.
Open hours: daily - 10:00 to 17:00
Admission: charge, discounts available for children and seniors, children four years old and under are free

Address: Pacific Highway, Oxenford, Gold Coast, Queensland (QLD), 4210, Australia
Tel: +61 (0)7 5573 2333
Wet 'n' Wild Water World lies on the southern outskirts of Brisbane, being roughly 60 km / 37 miles away and reachable in under an hour. Brimming with fun water slides, waves, splash-play areas and all kinds of activities, this major attraction is owned by Warner Village Theme Parks. Opened in 1984, Wet 'n' Wild features almost 20 individual slides and four pools, and on a good year attracts in excess of one million visitors. Particular highlights include the pirate-themed Buccaneer Bay, the lazy river at Calypso Beach, the Giant Wave Pool, the River Rapids, the Mammoth Falls and the Surfrider, where anyone can try their hand at surfing on a simulated wave.
Open hours: daily - 10:00 to 16:00
Admission: charge, discounts available for children and seniors, children four years old and under are free

Address: 28 Tomewin Street, Currumbin, Queensland (QLD), 4223, Australia
Tel: +61 (0)7 5534 1266
The Currumbin Bird Sanctuary, on the Gold Coast, is just over an hour away from Brisbane and to the far south-east, being close to Coolangatta and filled with colourful parakeets and wild fowl. With a large lake, seasonal events, feeding demonstrations and a number of native animals, the sanctuary opened way back in the 1940s and has become known for its flocks of friendly Rainbow lorikeets, who regularly come here to feed. Visitors may also enjoy the dingo encounters, the saltwater crocodiles, the walk-through aviary, the reptile house and the curious Tasmanian devils. You can finish off your trip with a ride around the grounds on the miniature railway.
Open hours: daily - 08:00 to 17:00
Admission: charge, discounts available for children and families, children four years old and under are free

Address: Dreamworld Parkway, Coomera, Queensland (QLD), 4209, Australia
Tel: +61 (0)7 5588 1111
A sizeable theme park situated roughly 55 km / 34 miles to the south-east, Dreamworld resides within the Upper Coomera suburbs and offers the perfect day out for families. There are certainly plenty of attractions based within this 200-acre / 80-hectare park, including around 30 different rides. Opened in 1981, Dreamworld is divided into a number of different themed zones, with Main Street serving as the entrance and leading to the Town of Gold Rush, as well as Rocky Hollow and the Australian Wildlife Experience. Children's entertainers are based within Wiggles World, while at Rivertown are two of the principal thrill rides - the Tower of Terror II shuttle rollercoaster and Mick Doohan's Motocoaster, an unusual motorcycle coaster. Sumatran and Bengal tigers await visitors on Tiger island, with Kid's World being where you will find the suspended rollercoaster named the Sky Rocket.
Open hours: daily - 10:00 to 17:00
Admission: charge, discounts available for children, students and seniors, children six years old and under are free

Address: Waterworks Road, The Gap, Brisbane, Queensland (QLD), 4061, Australia
Tel: +61 (0)7 3404 8888
Located close to the Woods Memorial Playground and the Ashgrove Scenic Reserve, the Corra-Mulling Family Park lies on the north-western side of the city centre, where it is home to a large children's playground, a basketball court, seating areas and mature trees. Nearby, the Ashgrove Sportsground, the Mount Coot-Tha Forest and the Taylor Range Country Club provide further interest.
Open hours: daily - 24 hours
Admission: free

Address: 400 Moggill Road, Indooroopilly, Brisbane, Queensland (QLD), 4068, Australia
Tel: +61 (0)7 3878 2468
Gymboree Play Programs provides the perfect place for babies and young children to let off steam, with soft play areas, toys and friendly teachers. Children are able to develop all kinds of skills through play, and music lessons, art classes, sports and family themed activities are all available here for different age groups. As well as a branch in the western suburb of Indooroopilly, further Gymboree outlets can be found in the neighbourhoods of Gumdale (New Cleveland Road), McDowall (at the Northwest Plaza Shopping Centre on Flockton Street) and Sunnybank (at the Sunnybank Plaza Shopping Centre on McCullough Street).
Open hours: Monday to Saturday - 09:00 to 16:00, Sunday - 09:00 to 13:00
Admission: charge