Getting Around, Dallas Travel, Transport and Car Rental 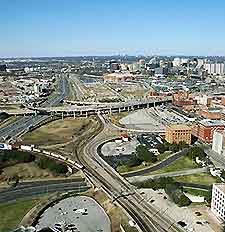 Public transport is well organized in Dallas with travel options including road, rail, air, tram and taxi. The transportation network for getting around is centered on the Dallas Area Rapid Transport (DART) system, which runs a bus, tram and light rail service. This travel network includes the popular tram, which connects Uptown Dallas with the Art District in the downtown area.

Dallas Fort Worth International Airport (DFW) is a large and busy terminal for flights from all over the USA, as well as limited long haul routes from Europe and numerous connections to Mexico and the Caribbean. A rail service, shuttles and taxis connect passengers to the city center, 15 miles to the east. Dallas is also at the center of road travel in Texas, with at least three major highways converging in and passing through the metropolis.

Address: 3200 East Airfield Drive, Texas TX, 75261, USA
Tel: +1 972 973 3112
Dallas Fort Worth International Airport sits midway between the two cities and lies 15 miles from the center of Dallas. Even though it is not geographically a central hub, this is still a very busy international terminal that receives around 1,500 daily flights from Europe, Mexico, the Caribbean and many US cities. However, the bulk of its traffic is domestic. Taxis, limo services and shuttles provide travel and transport into Dallas and other centers in Texas, although the cheapest alternative is the Trinity Railway Express, which runs into downtown Dallas. For further information, please refer to the Dallas DFW Airport page.

Located much closer to the city, Love Field Airport continues to receive domestic flights and offers a much more convenient option for short hops and business travelers. 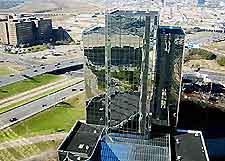 America is the land of the automobile and Texas is one state where a car is essential for getting around. If you plan on exploring the state or city, you will certainly need a rental car to cover the long distances involved. About a dozen major highways converge in Dallas, making it easy to get to and from the rest of Texas and the southern states. Houston is south on the I-45; Austin and San Antonio are southwest on the I-35 and the Mexican border at El Paso is west on the I-20. This same highway continues east into Louisiana. The I-35 will take you north towards Oklahoma City and the I-30 runs northeast to Little Rock, Arkansas. Parking is problem in the central districts and driving during rush hour in Dallas isn't recommended if you are new to the city. Driving time to Fort Worth is about one hour; Austin, five hours; San Antonio, six hours; and El Paso, 12 hours. Renting a car can be an economical way to travel around the Dallas area, with some firms offering discounts for rentals of three days and over, particularly when booked online, using the Internet.

Greyhound bus is an extensive network reaching all towns across the USA, and although it is cheap, this method of travel is probably the least comfortable means of travel, particularly over long distances. The Dallas Area Rapid transport (DART) runs a very efficient city service which includes buses, trams and light rail.

Amtrak runs the Texas Eagle service which connects San Antonio with Chicago daily, while the Sunset Limited travels through Houston and San Antonio en-route between Miami and Los Angeles on a non-stop service. Trains arrive and depart from Union Station near the West End and connect with DART rail services.

There is a popular tram service along McKinney Avenue which runs between the Uptown entertainment area and the Arts District in downtown.

Taxis are found throughout the city of Dallas, with over 1,000 in the metropolitan area, and are most easily flagged down from curbsides in the Central Business District (CBD). The flag fall is minimal and thereafter a small charge is made every quarter mile. Dallas taxi cabs also tend to congregate at designated points in the entertainment areas of Deep Ellum and Uptown in the evenings where parking can be a problem.