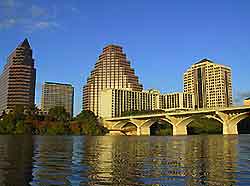 The city of Austin stands on the banks of the Colorado River and has been the capital of Texas since the 1840s. Situated in the very heart of Texas, Austin is surrounded by a particularly beautiful area of green hills and large lakes. Austin is known for its music scene and live entertainment, and is also home to a large university community, attending the impressive University of Texas (UT).

The city's laid-back and relaxed attitude has long been a major attraction for tourists, who visit Austin to soak up the atmosphere and small-town ambiance. With cycling routes, hiking trails, historical buildings, cultural districts and a host of restaurants, one of the most unusual and popular tourist attractions in Austin is the enormous bat colony who live underneath the Congress Avenue Bridge, attracting large crowds each evening as they emerge.

The Austin Convention and Visitors Bureau is a useful place to visit and stands on East Sixth Street, where you can learn more about walking tours of the city and find tourist information relating to the areas of Bremond Block, Downtown, Guadalupe Street, Hyde Park, Lamar Boulevard, the Warehouse district and Zilker Metropolitan Park. Most large hotels in the city will also be able to provide you with basic tourism advice and leaflets.

There are many hotels throughout Austin, providing accommodation options at all levels, with a good choice residing on Delmar Avenue, East 11th Street, Middle Fiskville Road, North Interstate 35 and the Waterford Center Boulevard. Further hotels are situated close to the nearby Austin-Bergstrom International Airport (AUS), offering affordable and convenient accommodation. Much chain lodging tends to line the interstate, although it is generally considered that the cheap motels on South Congress Avenue (near to Oltorf Street) are best avoided. More information about Austin Hotels. 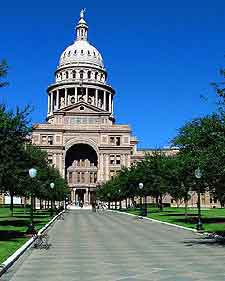 Austin has features some truly impressive tourist attractions, including the Congress Avenue Bridge - home to a colony of more than 1.5 million bats, who congregate here each year from March to November; the State Capitol - a magnificent building and one of Austin's most famous landmarks, with regular free guided tours; the Capitol Visitors Center - situated at the entrance to the capitol complex; Zilker Metropolitan Park - a vast parkland, with playing fields and the landscaped Zilker Botanical Gardens; and Barton Springs Pool - an enormous spring-fed pool, attracting both locals and tourists.

Other popular sights in Austin include the University of Texas - a major research facility, housing a number of important museums and art galleries; the Texas State Cemetery - lying just east of downtown and home to some of the Austin's most distinguished residents of yesteryear; St. Mary's Cathedral - a striking Roman Catholic building, built in the 1870s with Gothic-style architecture; and the Governor's Mansion - designed in 1865 and home to the Texas governor. More information about Austin Tourist Attractions and Austin Landmarks. 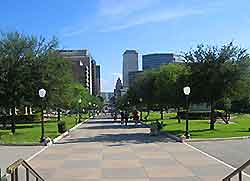 Tourist attractions located nearby include Austin Zoo and Animal Sanctuary - situated to the southwest of downtown, where visitors are able to get extremely close to many of the animals; the Highland Lakes - an impressive chain of lakes to the northeast, created during the 1950s to 1970s by building dams on the Texas Colorado River; Jourdan Bachman Pioneer Farms Living History Park - giving a real an insight into life in 19th-century Texas, with a classic rural American scene; Texas Hill Country - standing to the west and southwest of Austin, full of hiking and rock climbing activities, together with spectacular views and quaint towns; and San Antonio - easily reached via the I-35 interstate, retaining the feel of a small town with a distinct cosmopolitan air. More information about Austin Attractions Nearby.

Austin also features many top museums, such as the Bullock Texas State History Museum - home to various exhibits, documents and information from other Texan attractions; the Thinkery - a superb family attraction, with hands-on exhibits for all ages; the LBJ Presidential Library and Museum - devoted to the 36th president; the Texas Memorial Museum - celebrating natural science, with enormous dinosaur models; the Umlauf Sculpture Garden and Museum - boasting beautiful gardens displaying many large and famous sculptures; and the Blanton Museum of Art - with an extensive collection of around 20,000 artworks from throughout the world. More information about Austin Museums and Austin Art Galleries.