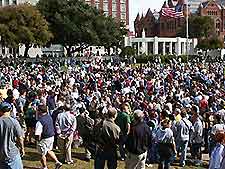 Dallas, Texas, has an amazing variety of events and festivals throughout the year to entice and entertain visitors from across the globe. From traditional Texan activities to modern day ballets and concerts, tourists will not be left short of things to see and do during their stay. Highlights include the State Fair of Texas held in September and October, Mardi Gras carnival held in February, and the North Texas Irish Fest. in March.

The lively atmosphere of the city's many expositions and showcase events warrants Dallas with the well earned reputation of being host to some of the country's best calendar events. Helpful tourist information offices in Dallas are always a useful source for current events and festivals in Dallas. Many of the events and festivals in Dallas draw large crowds, offering tourists a range of things to see and do whilst staying in the vibrant city of Dallas.