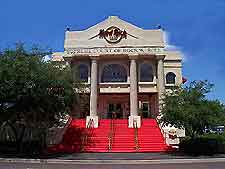 With nearly four million people to feed, Dallas is not short on restaurants, dining options and general eateries. Particularly concentrated in the central districts of Dallas, there are many specific entertainment precincts, such as Uptown, Deep Ellum and Greenville, which have developed into popular areas full of restaurants, bars and cafés. Dining in Dallas offers all sorts of cuisine, from the home grown Tex-Mex to Southern, seafood, and Mexican food, as well as an array of international cuisine including French, Greek, Spanish, Italian, Thai, Chinese, Indian, and more.

Uptown is probably the most popular area in the city of Dallas for lunch and dinner, and includes a large area either side of McKinney Avenue which is pedestrian friendly and offers a wide choice to suit all budgets and tastes. The other chief entertainment area in Dallas is Deep Ellum, a renovated district of turn-of-the-century warehouses that was once a popular jazz and blues center in the thirties. Today it is known for its live music and trendy bars, and also its many fine restaurants. 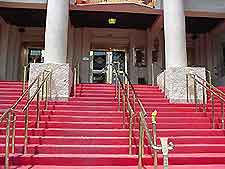 It is possible to find a bite to eat at any hour in Dallas, with 24-hour diners found both in the city center, popular entertainment areas and selected points out in the suburbs. In the Central Business District (CBD) of Dallas, most restaurants open for lunch from 11:00 to 14:00, although informal places may remain open all afternoon. Evening venues tend to open from 17:00 until about 22:30. For late night dining, you're widest options are found in Deep Ellum, where there is a lively music scene and plenty of bars and late hours restaurants.

The former warehouse area of Deep Ellum, which was recently upgraded into an entertainment area, probably contains the greatest concentration of wine bars and restaurants in Dallas, with a good selection of beer and beverages. The area is essentially a live music precinct, so a quiet dinner here is unlikely. Uptown has a wide selection of restaurants, including numerous choices that offer good wine and beer menus. These are found near McKinney Avenue where the tram can help you get around if you are too tipsy to walk.

Breakfast for commuters is an American tradition and the Central Business District (CBD) in Dallas features numerous coffee shops, fast-food chains and diners that offer all sorts of breakfast meals, from take out donuts to full American breakfasts. As a visitor in Dallas, you are likely to quench your appetite at one of the many informal places found in the vicinity of Founders Plaza and West End Market Place, in the touristy West End district. 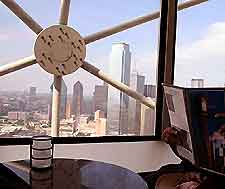 The Central Business District (CBD) caters for business people with a wide range of lunch restaurants that generally open from 11:00 to 14:00, although some reopen for evening meals. This area of Dallas includes the West End and Arts District. Although Uptown Dallas is more popular by night, it still has plenty of restaurants, most of which cater for the lunch market. If you are in the 'Parks' area of Dallas, which includes University Park and Highlands Park, you will find both cheap canteens and cafés catering to the student crowd, as well as some discreet up market places that fit in with the expensive real estate market here.

After dark, you are more likely to find a good selection of restaurants in the popular entertainment districts of Uptown, Deep Ellum and Greenville, with only a selected few serving the Central Business District (CBD). Uptown, located north of Dallas city center, is a lively and popular cluster of restaurants and bars, which comes alive at night. Evening restaurants are grouped for several blocks either side of McKinney Avenue. Deep Ellum is exclusively an evening district with its bars and music clubs, but also features many restaurants in this trendy restored warehouse area. Greenville attracts yuppies and hippies, providing Dallas restaurants with an atmosphere that appeal to either of these groups.