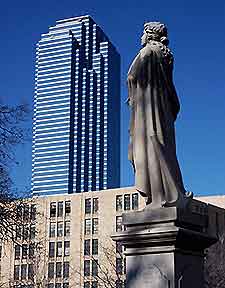 First time visitors to Dallas are forgiven for imagining the city as a featureless cluster of sky rises built on oil money and populated by Larry Hagman characters. In fact, the city of Dallas boasts some historic locations, districts and neighborhoods that retain the character of more than 150 years of Southern culture, as well a large Arts District just north of the touristy West End.

The Uptown area and Greenville are popular leisure districts full of bars, restaurants and entertainment, while live music is particularly strong thanks to the revival of the old Deep Ellum district. Out of town, the Fair Park complex is a wonderful family oriented collection of museums, amusement options and parks which was originally developed for the 1936 Texas Centennial Exposition.

Located at the north end of the downtown area, the Arts District is a specifically designated 17 block area which includes several of the city's galleries and art museums. The hundred year old Dallas Museum of Art takes up a whole block between North Harwood and North St. Paul streets. Also found here are the Trammel Crow Center - with its Asian Art collection, the Nasher Sculpture Center, Morton Meyerson Symphony Center, Cathedral Plaza and Arts District Theater, all sandwiching Flora street. If you happen to be in Dallas on the first Saturday of the month you can join the Arts District stroll, which takes you on an informative tour of the area starting from 2010 Flora Street at 10:30 (free of charge).

Acting as a youthful counterbalance to the Uptown district of Dallas is Deep Ellum, which was formerly a warehouse area before being restored and transformed into a trendy area for the rejuvenated live music scene. It is here that you will find the greatest concentration of music venues and lively bars, with more than 42 nightclubs. In recent years, the Deep Ellum district of Dallas has become one of the trendiest hangouts in the city for the younger crowd. Deep Ellum started out as a hotbed of jazz and blues more than 100 years ago, therefore its revival is quite fitting. This area of Dallas has a distinctive 'New Orleans' atmosphere and also includes plenty of trendy shops and galleries. Deep Ellum is found northeast of Highway 75 which bisects Dallas city center and there is a Visitors' Center near the corner of Commerce and Walton Streets.

The young and trendy congregate in this district, attracted by its unique and unusual shops, hip restaurants and popular clubs. Greenville Avenue in Dallas comprises of two distinctive parts, with Upper Greenville taking on a more yuppie, upmarket character and the Lower Greenville area south of Mockingbird Lane displaying a distinctly bohemian feel.

Characterized by opulent homes, the Swiss Avenue area of Dallas is now an expensive residential area that comes with plenty of history, making it a tourist attraction in its own right. Many of the houses date back to the early days of the city and the area includes fine examples of English Tudor, Georgian, Spanish and Prairie buildings. This Dallas district is listed on the National Register of Historic Places.

Also known as 'The Parks', when combined with Highlands Park, the University Park district of Dallas encompasses several important universities, colleges and schools, and is also a prestigious, leafy suburb within close proximity to the downtown area. Interestingly, it administers itself as an 'independent city' due to a fallout with the Dallas City Council in 1924. University Park is a wonderful place to escape the Dallas high-rises and take a quiet suburban stroll, particularly with its pretty parks.

If you're looking for some of the finest or best value restaurants in Dallas, head to the Uptown district, just north of the Arts District and West End. Here you'll find a large selection of cuisine centered around Maple Avenue, Turtle Creek and Oak Lawn Boulevard. Numerous lively bars are also found here with stylish boutiques and relaxing spas creeping in on the area, blending shopping and entertainment. The Uptown district of Dallas is almost self-contained, with several good hotels and a couple of theaters. A tram system runs the length of McKinney Avenue and a green belt of parkland borders the northern edge of the district. There is a visitors' center on McKinney Avenue between Worthington and Allen streets. 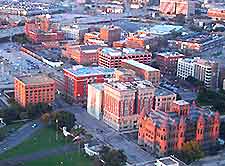 This is the most tourist friendly area of Dallas and has been purposely developed with restaurants, hotels and shops. The West End is a good starting point for any visitor to the city with its attractions such as the West End Market Place and the nearby Founders Plaza, as well as the famous Dealey Plaza where John F. Kennedy was shot.

You can easily witness for yourself the location of the famous Book Depository (now housing the popular Sixth Floor Museum) and boulevard where the president's cavalcade passed on that fateful day in 1963. Also within easy walking distance are the Dallas World Aquarium (North Griffin street), Dallas Museum of Art, Dallas Alley and Reunion Tower, which offers fantastic birds eye views of the city from its observation deck. There is also an information booth located at the southwest corner of Founders Plaza, in the West End district of Dallas.