Getting Around, Minneapolis Travel, Transport and Car Rental 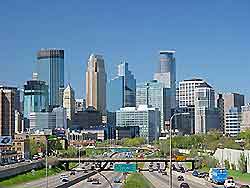 Lying halfway between the key cities of Los Angeles in the west and New York in the east, Minneapolis is a springboard to virtually anywhere in the US. The Twin Cities are well-served by bus, coach and train connections, and are home to one of the biggest and best airports in the country, while they are also situated at the intersection of two major state highways, making travel easy and convenient.

Voted Best Large Airport in North America for several years running, Minneapolis / St. Paul International Airport is one of the busiest transport hubs in the country, with virtually all major airlines offering connections to domestic and international destinations.


The airport serves close to 34 million passengers annually and is located just a short drive from the city center, offering convenient access to and from downtown Minneapolis via bus, train, tram, taxi, shuttle and hire car. For further information, please refer to the Minneapolis Airport page. 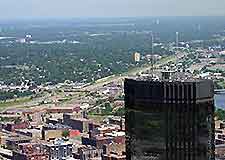 The Twin City set of Minneapolis and Saint Paul is America's largest metropolitan area and a car is essential if you wish to fully explore both cities and travel to their outlying areas. However, be alert while driving as Minneapolis drivers are renowned for being among the worst in the country! The Twin Cities are located at the junction of two major interstate highways, I-35 and I-94. I-35 runs north-south from Duluth, Minnesota, to Des Moines, Iowa, while I-94 travels east-west from Milwaukee, Wisconsin, to Billings, Montana.

Metro Transit buses travel around the Minneapolis / St. Paul region, providing transport to downtown and local destinations. Greyhound buses offer connections to US destinations farther afield, with depots in downtown Minneapolis, downtown Saint Paul and at the airport. Bus journeys from Minneapolis to Milwaukee and Chicago will take around 6 hours and 8 hours respectively.

Amtrak trains leave from the train station located between the two cities and travel to destinations across the country. Daily trains serve Milwaukee and Chicago to the southeast and Seattle to the west.

The recently-installed Minneapolis light rail transit system (LRT) is known as the Hiawatha Line and runs from the Warehouse District in the city center, stopping at 17 stations along the way. Stops include both airport terminals, the Mall of America and Fort Snelling.

Taxis are plentiful in Minneapolis and easily available outside hotels and public venues or by telephone, although they are not the cheapest form of Twin City transport.