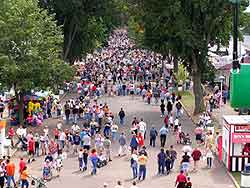 Every year, Minneapolis plays host to a fabulous program of events including numerous cultural performances, vibrant music festivals and superb art fairs. With the advantage of nearby Saint Paul across the river, the Minneapolis area has plenty of options and things to do, including the famous Winter Carnival and the Minneapolis International Film Festival in April.

One of the more bizarre events in Minneapolis is the aquatennial water festival, which has been running since 1940 and is a fun event, attracting locals and tourists alike.