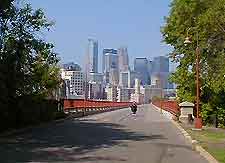 The western sister of the 'Twin Cities' set, Minneapolis is one of America's most exciting destinations with dozens of options for entertainment and leisure, a host of historical buildings, mind-blowing modern skyscrapers and some of the country's most impressive art museums. The city of Minneapolis is divided into various districts, some of which contain several diverse neighborhoods, each with its own unique character and community.

Downtown Minneapolis' most outstanding feature is the shop-filled Nicollet Mall, while aptly-named Uptown Minneapolis is known for its upbeat vibe and sparkling night scene. Dinkytown is a quaint and colorful student hang-out; Loring Park is the site of several annual festivals and home to a fabulous recreational park; Linden Hills throbs with summer music events; and the Minneapolis Riverfront District is steeped in history, but alive with contemporary action.

A small neighborhood located next to the University of Minnesota and imbued with a lively student atmosphere, Dinkytown's interesting title is of uncertain origin. Namesake possibilities include the 'dinky' trollies that used to provide transport through the Minneapolis region and the four-seater theater in the area which was affectionately termed 'The Dinky' for years. Despite its small size, the neighborhood is a culinary delight with a number of tempting restaurants, coffee houses and shops that draw both locals and tourists. Minneapolis's Dinkytown district also presents fantastic opportunities for nightlife, with the student population ensuring an effervescent after-hours scene. 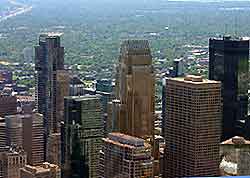 Downtown Minneapolis is a buzzing hub of shopping, dining and business activity, with a plethora of towering architectural feats, theater and music venues, countless stores and endless eateries. The pedestrian walkway, known as Nicollet Mall, cuts through the heart of Minneapolis city center and is a shopaholic's paradise, packed with retail centers, department stores, one-of-a-kind boutiques, trendy clothing outlets and specialty shops. The famous, hat-tossing statue of Mary Tyler Moore is also located in Minneapolis's downtown district, as are dozens of restaurants, cafés and coffee houses which have earned Nicollet Mall the nickname 'Restaurant Row'. Beginning in downtown Minneapolis and extending beyond is an area known as the Warehouse District, worth a mention for its antiquated warehouse structures, many of which have now been converted into fashionable loft apartments.

Located on the outskirts of the southern downtown Minneapolis area, the Loring Park district is home to roughly 7,500 residents, numerous commercial operations, several great restaurants, a number of the city's major attractions and entertainment venues galore. The lovely Loring Park can also be found in Minneapolis' Loring Park district, with its beautiful garden, lake and abundant bird species. The community is interesting, creative and diverse, making Loring Park a fertile ground for some of Minneapolis' most vibrant festivals, including the GLBT Pride Festival, the Ashley Rukes Parade, the Arts and Fringe Festivals and Shakespeare in the Park. The Walker Art Center, the Minneapolis Sculpture Garden and the Guthrie Theater, which are just a few of the highlights of Loring Park neighborhood. 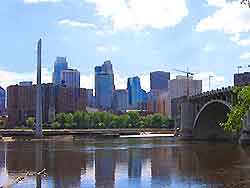 Bursting with historical sites, riverside restaurants, national landmarks and scenic trails, the Minneapolis Riverfront District is one of the city's prettiest and most appealing neighborhoods and districts. Enjoy a meal at one of the many waterfront eateries, take a stroll along the historical Heritage Trail, learn about the region's flour-milling past or simply peruse the many cultural and architectural attractions dotted throughout the district. All these activities and more are in store for visitors to the Minneapolis Riverfront. Highlights here are Minneapolis' oldest frame house, the Mill City Museum and St. Anthony Falls and the Stone Arch Bridge.

The beating heart of Minneapolis is undoubtedly the area known as Uptown, located just a stone's throw away from the downtown district around the junction of Hennepin Avenue and Lake Street. Home to a youthful, trendy and liberal community and pulsing with vital energy, Minneapolis's Uptown district is crammed with chic night spots, eclectic cafés, sidewalk music events and a kaleidoscope of retail stores - all hip and happening late into the night. Things hot up even more over the first weekend in August when the annual Metris Uptown Art Fair draws artists and craftsmen from local, national and international destinations to the Minneapolis Uptown district, to sell a vivid assortment of paintings, sculptures, jewelry, clothing, ceramics and other interesting goodies.