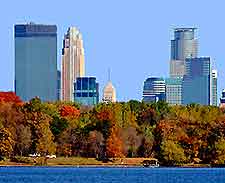 Together with Saint Paul, the capital of Minnesota, the city of Minneapolis forms the 'Twin Cities' along the banks of the mighty Mississippi River.

Surrounded by wetlands and many lakes, with the Minnesota River joining the Mississippi River to the south of the cities, Minneapolis is a major commercial and financial hub, as well as a destination for water-based and other outdoor activities. Cultural events such as concerts, art exhibitions and theater productions are also major draws.

The original inhabitants of the region in early Minneapolis history were the Dakota Sioux Indians, who were pressured by the US government to sell their land as a location for a new city. The 1819 construction of Fort Snelling in the area encouraged settlement, particularly from the east of the country, and resulted in the arrival of many pioneer families.


The new settlement developed close to the Mississippi River's highest cascade, the Saint Anthony Falls, with the young town of Minneapolis becoming well-known for its grain millers, which all used hydropower to turn their mill wheels. This technology was fully developed by the end of the 19th century, resulting in the town's description as the 'greatest direct-drive waterpower center in the world'.

A railroad linking the city with Chicago arrived in 1867, spurring manufacturing industries to open, although grain sent for milling by Great Plains farmers was still the main economic staple. Indeed, there were 34 flour mills set around the city at the time. Other developing industries included paper mills, as well as cotton, wool and wood-planing mills, an iron foundry and engineering works serving the railroad. The companies of General Mills and Pillsbury were both founded in Minneapolis, and by the turn of the century, a tenth of America's grain supply originated here. 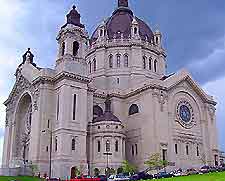 Civil Rights and the 20th Century

Civil rights and trade union support matured early in Minneapolis history, with a daughter of the city, Martha Ripley, establishing a ground-breaking maternity facility open to unmarried as well as married women in the late 19th century. Violence during the Teamster Union's strike in 1934 resulted in the prompt development of legally binding worker protection based on civil rights according to the US Constitution.

One of the world's first Human Relations Boards, aimed at the protection of minority groups, was also set up, and by the 1950s, desegregation was underway in the city. In the years following these events in Minneapolis history, the Civil Rights Movement and the American Indian Movement were both supported and encouraged.

Sadly, similar consideration was not extended to huge swathes of the city's heritage buildings during the 1950s and '60s urban renewal phase, with over 25 city blocks summarily demolished and replaced with modern buildings. On a positive note, outcries by citizens over the demolition of the Metropolitan Building resulted in more attention being given to the city's historic sites.

Nowadays, although the grain-milling industry still exists in Minneapolis, logistics, financial services and commerce are now the city's major economic base. High technology is a growing sector, and theater and the arts form a major part of Minneapolis culture. The city offers a huge network of landscaped parks, with the most notable being the Chain of Lakes, set in beautiful surroundings and offering a wide range of outdoor activities.