Getting Around, San Francisco Travel, Transport and Car Rental

San Francisco has an excellent public transport system and the city pass provides unlimited travel on the city's buses, trolley cars and cable cars. Not only does the city pass save you money, it also gives you free entry to several of the top local attractions. 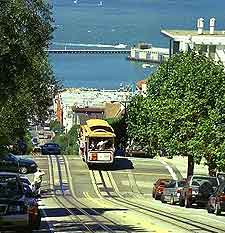 Address: 401 Van Ness, San Francisco, California, USA, 94102
Tel: +1 415 673 6864
The San Francisco Municipal Railway, known simply as Muni, operates the city's busy cable car system. Cable cars are a very convenient way to travel around the city and are a popular form of public transport. The cable cars provide a reliable way to travel around the steep hills of San Francisco and can become crowded during peak commuting hours. Tickets can be purchased either from the conductor or from the ticket booths near to Fisherman's Wharf. There are three cable car lines in the city:

San Francisco's public transport system is so good that a car is not usually needed to explore downtown and parking in the city can also be difficult. However, if you want to travel outside of the city and explore the surrounding area, hiring a car is an excellent method of transport.

Buses in San Francisco travel to almost every part of the city and beyond. The city's buses travel over the bridges to Marin Country and Oakland. Some of the city's buses are powered by overhead cables and others use conventional engines. Local buses are all numbered and clearly display their location at the front of the bus.

Taxis in San Francisco are fairly plentiful in the downtown area of the city and this is particular so during the bust rush hours. Taxis can be easily hailed - just look out for the lighted sign on the top that indicates if the taxi is available for hire. Extra travel charges may be included for luggage or late-night traveling, so it may be useful to ask the taxi driver about these before leaving.

The San Francisco Bay Area Rapid Transit system, better known as BART, is a high-speed rail network that connects the city with the East Bay, including links to Oakland, Richmond, Concord and Fremont. There are four stations located along Market Street and tickets are dispensed from machines in the stations. The trains run regularly every 20 minutes and children ages fours yeard old and under travel for free on the BART system.

The Golden Gate Ferry Service operates between the San Francisco Ferry Building at the bottom of market Street and downtown Sausalito. This service runs at regular intervals throughout the day and provides a particularly scenic way to travel in the city. There are also ferry services that travel to Pier 39 in the Fisherman's Wharf area and Tiburon.

Cycling in San Francisco is a very popular means of travel. Bicycles can be rented from Fisherman's Wharf, where they provide a suggested cycle route, which takes you over the Golden Gate bridge and lasts around two hours.