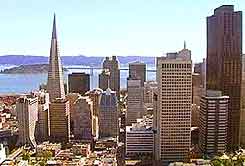 In the mid-19th century, the gold rush brought enormous prosperity to this area and transformed San Francisco into a cosmopolitan city, almost overnight. San Francisco's Financial District is situated east of Union Square and is bordered by the Embarcadero, Market, Third, Kearny and Washington Street.

This is San Francisco's main business region and is home many of the city's major corporations. Highlights include the TransAmerica pyramid at Montgomery, which is one of the Financial District's most distinctive architectural features. An impressive mix of old and new businesses are currently flourishing in this popular business district.

Business hours in the San Francisco bay area are usually from Monday to Friday, between 09:00 to 17:00, although some city offices may close slightly later. Many shops are open longer and often throughout the weekends, and some supermarkets are open 24 hours. Banks in San Francisco generally open from 08:00 to 16:00 and on one day of the week until late in the evening. On Saturdays, banks in the city are often open until midday. 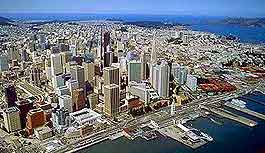 Working lunches are a popular way to do business in San Francisco and Americans are quick to use first-name terms. Some exclusive restaurants have a strict dress code, although a more informal, yet presentable dress code is acceptable. Drinks or dinner is a popular way to end the hard working week.

Many restaurants now have a strict 'no smoking' policy, although some tend to cater for smokers in different areas. Most offices are now nonsmoking and as this is currently a sensitive subjective in America, it is best to only smoke when in the company of like-minded people.