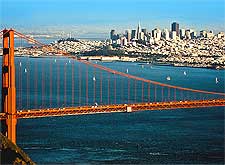 Built on the foundations of the 1848 California Gold Rush, San Francisco has never looked back. It continues to be one of America's wealthiest and most influential cities.

Today, it's more about high-tech and finance than minerals, but few can dispute the outstanding natural beauty of the bay or the city's role as a metropolis of all things cool and progressive.

Like much of California, the history of San Francisco begins with the arrival of the Spanish in 1796 as they charted their way along the coast, claiming territory for Spain. The discovery of San Francisco Bay was a major one, prompting the first expedition to establish religious and military outposts.


The Presidio was the center of Spanish military coordination, while the Mission San Francisco de Asis tried to convert the 10,000 or so Ohlone Native Americans, who already inhabited the area, to Catholicism. Both of these historic, still-standing buildings are popular tourist attractions today.

San Francisco's original name, Yerba Buena, derived from the herb that grew throughout the area. Visitors can check out the Yerba Buena Gardens and the Moscone Center to see exactly where the rich and colorful history of San Francisco began. In 1821, the town switched from Spanish to Mexican control until the end of the Mexican-American War of 1848, an event which ended in the city and California becoming part of the United States. 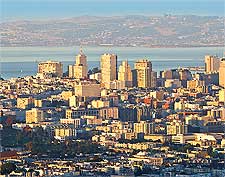 Just after San Francisco joined the United States, the California Gold Rush kicked off in the Sierra Nevada Mountains to the east of the city, with the Comstock Lode discovery in 1849. This boom literally built San Francisco, turning it almost overnight into a major port for commerce and a home to some of the country's wealthiest men. Its population exploded as fortune seekers and those who catered to them flooded in.

The Chinese were one of the largest groups of migrants to arrive, first working in the mines and then building the Transcontinental Railroad. Their Chinatown district remains amongst the largest in America and plays an influential role in local business and politics.

Evidence of the gold rush wealth can be seen all over San Francisco, from the Levi Strauss warehouse and the Ghirardelli chocolate factory to the mansions of local millionaires that are now among the city's top hotels, such as the Huntington Hotel and the Mark Hopkins Hotel.

The wild days surrounding the gold rush turned San Francisco into a lawless city. Its famous red-light district, Barbary Coast, was a den of gambling, prostitution and kidnapping. This is where the term getting Shanghaied came from. North Beach, Jackson Square and the financial district all overlap this once notorious part of town. 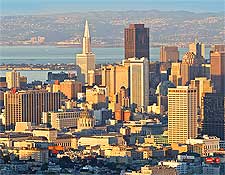 A Patchwork of Neighborhoods

Money, along with law and order, eventually gained control and San Francisco evolved into the wealthy and diverse city we see today. The steep hills created a unique landscape of little neighborhoods such as Haight-Ashbury, Nob Hill and Eureka Valley, all served by the iconic trolleys that still run up a few remaining sections of street. The city was on cruise control until San Francisco's history was forever altered by the 1906 earthquake and fire that razed 80 percent of the city.

In the aftermath of the earthquake, San Francisco rebuilt itself with better organization and infrastructure. The year 1937 saw the completion of the Golden Gate Bridge, the city's main icon. This was also the decade when the island of Alcatraz was opened as a federal prison for the likes of Al Capone and other criminals. Both World Wars provided a major economic boost for the city and helped to push it into the modern era.

Modern San Francisco is a city of openness and liberalism. The Beat Generation of the 1950s led to the 1960s hippie era, turning the city into a hot bed for writers, musicians and activists. In the '70s, the Castro district attracted a powerful open gay community.

In each of San Francisco's unique neighborhoods, visitors can get a taste of all these different ideologies, and it's exactly this diversity and tolerance that makes the city so popular to live in and visit.