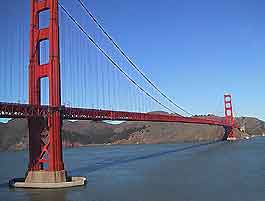 When it comes to landmarks in San Francisco, there is certainly no other single structure that symbolizes the city quite like the Golden Gate Bridge. Spanning the North American strait named the Golden Gate, this iconic bridge is without question the most photographed sight in San Francisco, appearing on endless city postcards. Costing some US$35 million to build, the bridge was built between 1933 and 1937, and when complete, immediately went into the record books for being the longest suspension bridge in existence, measuring some 4,200 feet / 1,280 meters in length.

The historic seismic activity in San Francisco has certainly shaped the city over the centuries, although it was the devastating earthquake in 1906 that really left its mark, destroying and damaging many of the most important buildings and landmarks. More recently, the Loma Prieta earthquake arrived in 1989 and while it lasted only a matter of seconds, it left thousands homeless.

These earthquakes are caused by the city's proximity to the San Andreas Fault and San Francisco has learned much from these past natural disasters, with buildings now constructed to withstand even the most powerful earthquakes. The Golden Gate Bridge was considered to be at significant risk and it has recently enjoy a 'seismic retrofit' program, whereby the bridge was rebuilt in stages at the cost of some US$400 million, whilst still being open to traffic.

Address: Lincoln Avenue, San Francisco, California, USA, 94129
Tel: +1 415 556 0560
The distinctive red color and supporting towers of the Golden Gate Bridge combine to make this a memorable landmark by day, and when the sun sets at the end of the day, the night-time illuminations give the bridge a whole new character. This bridge features a busy six-lane road which often suffers with congestion problems, although if you are simply wishing to take a close-up look, pedestrians are able to walk along the sides, enjoying the strategically placed lookout points and panoramas of the bay. There is also a visitors center and for those looking for the ultimate views, helicopter and kayaking tours are available.
Open hours: daily - pedestrians 05:00 to 21:00, 24 hours for vehicles crossing the bridge 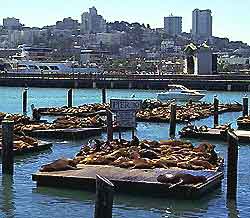 Address: Fisherman's Wharf, San Francisco, California, USA
Tourists frequently flock to Pier 39 and there is certainly much to do here. Visitors will find a cluster of shops and eateries, along with an amusement arcade and various attractions, such as both the Aquarium of the Bay and the Marine Mammal Center. From the pier you can enjoy good views of many city landmarks, such as the Golden Gate Bridge, Alcatraz and Angel Island.

Californian sea lions have long been associated with San Francisco Bay, congregating around Seal Rock. However, towards the end of the 1980s, the resident population of sea lions began to take an interest in Pier 39 and today, literally hundreds can often be counted floating on the surrounding platforms, lazing around in the Californian sun.

Address: 500 Fulton Street, San Francisco, California, USA, 94113
Tel: +1 415 551 3602
Pioneer's Monument is a tall landmark in the city and is situated on Alamo Square. The monument includes sketches at the base, depicting some of the earliest pioneers in California, such as Sir Francis Drake. These days, it is remarkable to learn that it was one of the only freestanding structures in the entire city to be left standing after the powerful earthquake in 1906.

Address: Presidio of San Francisco, 94129, San Francisco, California, USA
Tel: +1 415 556 1693
This grand fort began its life in the late 18th century, being rebuilt in the 1860s and offering some spectacular views of the Golden Gate Bridge. This high lookout point was originally fitted with 126 cannons, although it was never actually involved in any battle. One of the most interesting facts is that it featured in the famous 1958 Alfred Hitchcock film, Vertigo.
Open hours: daily - 10:00 to 17:00
Admission: free 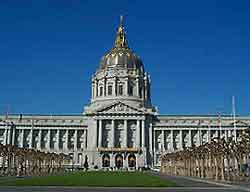 Address: 400 Van Ness Avenue, Civic Center, 94102, San Francisco, California, USA
Tel: +1 415 554 4000
The original San Francisco City Hall was completed in 1899, although just seven years later, a devastating earthquake swept through the city and destroyed this particular building and many others. Being left completely beyond repair, plans to replace this Civic Center complex were soon drawn up and the site cleared. The present-day City Hall was built between 1913 and 1915, to coincide with the Panama-Pacific International Exposition.

The building itself is impressive and was designed by two leading architects from Paris. On the top of the building is a large dome, which was actually based on the dome of St. Peter's Cathedral in Rome's Vatican City and is currently the world's fifth-largest. Over the years, some of the city's most famous events have taken place here. The City Hall is where Marilyn Monroe was married in 1954, and also, more recently, where over 100 gay and lesbian couples were married by the mayor.
Open hours: Monday to Friday - 08:00 to 17:00

Address: 1 Telegraph Hill Boulevard, 94133, San Francisco, California, USA
Tel: +1 415 362 0808
The Coit Tower is situated on Telegraph Hill, within Pioneer Park, where it dates all the way back to 1932. This tall tower stands out in the area and at the top are some of the best panoramic views of San Francisco and the bay in the whole city. Erected in 1993, the Coit Tower measures in at some 210 feet / 64 meters. Standing at the very base is a large bronze of Christopher Columbus, dating back to 1957. This statue was created following a sizeable donation by the local Italian-American community.
Open hours: daily - 10:00 to 19:00
Admission: charge, discounts available for children

Address: 2 Lake Street, San Francisco, 94109, California, USA
Tel: +1 415 751 2535
The Congregation Emanu-El features an enormous dome at the top of the temple. Built in the mid-1920s and just a stroll away from both the Presidio Terrace and the Presidio Golf Course, this grand synagogue has glorious stained-glass windows and is without doubt one of the more unusual landmarks in the city. The temple is clearly visible on the city's skyline and is actually North Carolina's biggest Reform synagogue.
Open hours: Monday to Friday - 13:00 to 15:00