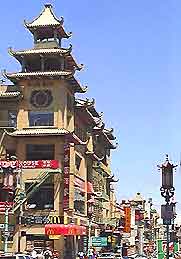 There are probably more restaurants in San Francisco per capita than any other city in the whole of the United States and practically every type of ethic cuisine is represent here. San Francisco is the nation's trendsetter when it comes to food and there are almost 4,500 different restaurants, cafés and bars in the city.

The lively city of San Francisco is full of wonderful and exciting places to eat out. There are many stylish restaurants and an enormous variety of excellent, mouthwatering menus, which provide nothing short of culinary perfection.

Many San Francisco restaurants now have a strict 'no smoking' policy, although some tend to cater for smokers in different areas. Whether you are looking for a romantic meal for two or trendy, lively dining, the only problem is deciding where to go as there are so many venues to choose from.


Cuisine options in San Francisco include:


Most bars in the city have a 02:00 closing time and the majority of restaurants also stay open late, but usually stop serving food at around 22:00. San Francisco provides a fantastic choice of places to eat, covering virtually every different type of international cuisine available.

The Cheesecake Factory at the top of Macys comes highly recommended and also offers excellent views of Union Square. This restaurant is always very busy and it can be difficult to get a table. However, the restaurant has developed an imaginative system to deal with this. If you arrive and there are no tables available, the restaurant will issue you with a 'beeper'. You are then able to go shopping nearby and when your table is ready, you are 'beeped'. The restaurant has a staggering choice of delicious cheesecakes for dessert.

The Stinking Rose on Columbus Avenue in San Francisco is another very popular restaurant. Open daily, the restaurant derives its name from the Romans, who referred to garlic as the 'Stinking Rose'. The restaurant has a special saying 'We season our garlic with food!' which describes their cuisine aptly. It is also the only place in the world where you can eat garlic flavored ice cream, which is surprisingly refreshing!

Another interesting place to dine in San Francisco is downtown, in the tall Bank of America building. Although from the outside this may simply look like an office block, if you take the lift to the 52nd floor you will find the Carnelian Rooms, where there is a superb restaurant, bar and cocktail lounge. This is an exclusive place to dine, but not expensive. The Carnelian Rooms requires a strict dress code.