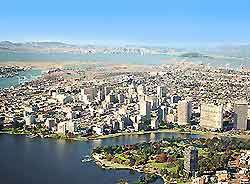 One of the largest ports in western California (CA), Oakland is located in the bay area and has an important political and economic history. The main tourist trade in Oakland is centered around the waterfront area of Jack London Square, which is filled with many stores and restaurants offering superb views.

Oakland is also home to a pedestrianized 'City Center' complex of offices, shops and cafés; a popular promenade area; a vibrant Chinatown district; many hilltop parks; and the impressive Oakland Museum of California. An increasingly important part of Oakland life, tourism in the area is encouraged, with many excellent restaurants, shopping centers, hotels, marinas and travel facilities available.

The main tourist information center in the Oakland area is the Oakland Convention and Visitors Bureau along 14th Street, in the busy pedestrianized city center. Offering a host of useful tourism and travel advice, together with information about self-guided walking tours and useful maps, other notable buildings nearby include the BART Station on 12th Street and the 1914 City Hall at 14th and Washington Streets. 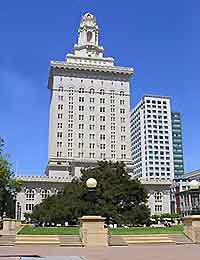 Providing a useful gateway to nearby San Francisco, hotels in Oakland are reasonably priced and suit all budgets, including many of the well-known hotel brands and chains. Accommodation in Oakland is concentrated around the downtown district and Chinatown, along the scenic waterfront and close to Jack London Square, on the northern and western side of Oakland. Further Oakland accommodation can be found nearby to Oakland International Airport (OAK), which is just a short journey from the city center. More information about Oakland Hotels. 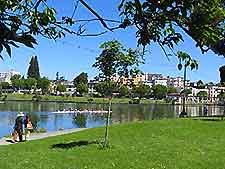 Some of Oakland's best museums include the Chabot Space and Science Center - with Chabot's Ask Jeeves Planetarium featuring live and pre-recorded shows; and the Oakland Museum of California - a three-story museum covering art, historical information and natural sciences. More information about Oakland Museums.