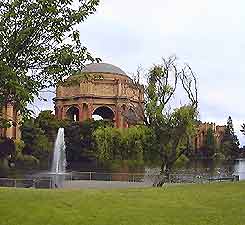 San Francisco is a busy city famed for its waterfront setting, towering architecture, steep hills and nightlife, although those here on a family vacation will find a number of attractions to keep children fully occupied and amused. At the top of any list should be a trip to San Francisco Zoo, where the animals range from elephants, giraffes, lions and monkeys, to flamingos, hippos, penguins and seals.

If you have a rental car, then it makes sense to venture outside of San Francisco, taking a day trip to Oakland, where top attractions include a city zoo and the charming Children's Fairyland, filled with sets that appear to have jumped right off the pages of fairytale story books. A little further afield is the Santa Cruz Beach Boardwalk, a historic amusement park founded in 1907, with a handful of rollercoasters and lots of fun for everyone.

Address: Sloat Boulevard and 45th Avenue, San Francisco, 94123, California, USA
Tel: +1 415 753 7080
San Francisco Zoo is one of the most highly rated animal parks in the whole of the USA and features more than 250 different species of wildlife from all over the world. This family attraction first opened in 1929 and is now spread over roughly 100 acres / 40 hectares, although plans for expansion are always underway. This is a major attraction for children in the city, receiving more than one million visitors each year.

The zoo in San Francisco is home to roughly 1,000 animals and most are contained in generous enclosures, surrounded by moats. Particular favorites include a breeding colony of penguins, one of the world's largest gorilla exhibits, lions and an 'Australian Walk About' exhibit, which features koalas, emus, kangaroos and many more interesting animals from this part of the world.

For children, there is an added attraction of a petting zoo, where you are able to get close to the animals. This barnyard is full of friendly animals that enjoy being stroked, such as sheep, goats, ponies and llamas. There is also a 'Zebra Zephyr' train tour of the zoo, which takes visitors on a 20-minute 'safari' ride.
Open hours: daily - 10:00 to 17:00
Admission: charge, discounts available for children and seniors, free on the first Wednesday of each month

Address: 400 Beach Street, Santa Cruz, 95060, California, USA
Tel: +1 831 426 7433
In the city of Santa Cruz, roughly 90 minutes to the south of San Francisco, this large amusement park is crammed full of funfair rides, state-of-the-art video games, virtual reality games and pinball machines. The award-winning Santa Cruz Beach Boardwalk makes the very most of its scenic setting fronting Monterey Bay and comes with the historic Giant Dipper rollercoaster, which first opened in 1924, and the even older Looff Carousel from 1911. Also popular is the Haunted Castle, the Cave Train Adventure, the Skyglider, the Logger's Revenge (log flume ride), the traditional Ferris Wheel and Neptune's Kingdom Adventure Center.
Open hours: Monday to Friday - 11:00 to 22:00, Saturday and Sunday - 10:00 to 19:00, seasonal variations can apply
Admission: free, charge for rides, season passes for the rides are available

Address: 9777 Golf Links Road, Oakland, 94605, California, USA
Tel: +1 510 632 9525
Just across from San Francisco Bay is the charming city of Oakland, which features many popular tourist attractions. In particular, Oakland Zoo is very appealing to families and is home to over 450 animals, birds and reptiles. The zoo dates back to 1922 and has been praised for its spacious naturalistic enclosures, which house baboons, camels, chimps, elephants, hyenas, lions, meerkats and tigers. Opened here in 2005, the Wayne and Gladys Valley Children's Zoo allows children and adults to get close to some of the most friendly animals and even stroke them. Visitors will also find a large playground, a picnic area, a wildlife theater, a fairground carousel and a fun miniature railway.
Open hours: daily - 10:00 to 16:00
Admission: charge, discounts available for children and seniors

Address: 699 Bellevue Avenue, Oakland, California, USA, 94610
Tel: +1 510 238 6876
Children's Fairyland is located in the city of Oakland, right next to Lake Merritt and just off the Grand Avenue. Covering more than 10 acres / 4 hectares, this entertainment park has been a popular attraction since opening in 1950. Highlights include traditional carrousel rides, puppet shows and large displays of characters from well-known children's stories. Visitors are able to interact with storybook sets, whilst enjoying the live entertainment and seasonal theatrical performances. The onsite Johnny Appleseed Cafe provides a range of snacks if you are feeling hungry, from mini pizzas and pretzels, to sandwiches and popcorn. Look out for the Alice in Wonderland Tunnel, the Fairy Music Farm Tunnel, the Jolly Roger Pirate Ship, the Old West Junction and Peter Rabbit's Garden.
Open hours: Winter - Friday to Sunday 10:00 to 16:00, Spring and fall - Wednesday to Sunday 10:00 to 16:00; Summer: Monday to Friday 10:00 to 16:00, Saturday and Sunday 10:00 to 17:00
Admission: charge

Address: 199 Museum Way, San Francisco, 94114, California, USA
Tel: +1 415 554 9600
The Randall Museum is full of exciting and enjoyable activities for children. There are many interesting and informative exhibits, including scientific displays, an animal center with friendly creatures, such as birds, mice, snakes and lizards, educational workshops and model making workshops for all ages.
Open hours: Tuesday to Saturday - 10:00 to 17:00
Admission: free