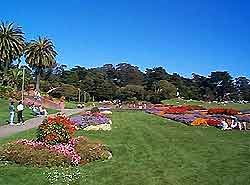 A hilly city known for its ups and downs, San Francisco is also known for its central parks and gardens. Especially famous is the city's magnificent Golden Gate Park, which was first conceived in the 1860s and was finally landscaped in the 1890s by John McLaren, who arrived from Scotland. Within the grounds, the glorious Hakone Japanese Tea Garden is not to be missed at any cost.

Located within the San Francisco Bay Area and just a relatively short distance to the east of the city, next to Oakland, the Redwood Regional Park contains some truly spectacular specimen redwood trees. The original trees were cut down during the 19th century for logging purposes and the giant redwoods of today are mostly the re-growth from these ancient stumps, being classified together as a California Historical Landmark. On the north-eastern side of the city center and close to Jackson Square, Levi's Plaza, Pioneer Park and the Justin Herman Plaza all warrant a mention.

Address: Corner of Stanyan Street / Fulton Street, San Francisco, California, 94118, USA
Tel: +1 415 561 4700
Totaling just over 1,000 acres / 405 hectares, the Golden Gate Park is a fairly narrow strip that stretches from the Pacific Coast inland. John McLaren was faced with many obstacles when creating this lush park in the center of San Francisco, including developing a new strain of grass to grow on sand dunes, powering the park's irrigation system by windmills and the western fringe that was continually eroded by the ocean - all of which were successfully overcome.

The Golden Gate Park has an enormous number of features, such as arboretums, botanical gardens, conservatories filled with tropical flowers, a large circular boating lake, a traditional Japanese Garden, a children's playground, a carousel ride, a golf course, soccer fields and bowling greens. There are also many trails for walking, jogging, cycling and even horse-riding here.
Open hours: daily - 24 hours 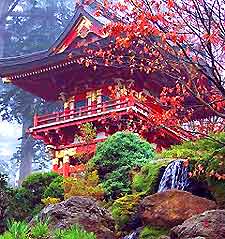 Address: Golden Gate Park, San Francisco, California, 94117, USA,
Tel: +1 415 668 0909
When you are ready for the perfect antidote to the frenetic pace of the city, the Golden Gate park provides the ideal oasis. In particular, the traditional Japanese Tea Garden is without doubt the most tranquil place in the whole of San Francisco city and covers around 5 acres / 2 hectares. The garden includes many wonderful features, such as ponds with koi carp, a large authentic pagoda, beautiful old Japanese maples, tall bamboo, an impressive ornate drum bridge, waterfalls, a Japanese Tea Room serving authentic green tea and a gift shop selling postcards. The Hakone Garden is quite unlike anything else in the city.
Open hours: daily - 08:30 to 18:30
Admission: charge, discounts available for children and seniors, free of the first Wednesday of each month

Address: 7867 Redwood Road, Oakland, California, 94619, USA
Tel: +1 510 636 1684
Situated in the East Bay of Oakland, close to San Francisco, the Redwood Regional Park is an inspiring spot to visit and is filled with majestic fully-grown Californian redwoods. These towering trees are more than 150 feet / 45 meters tall and over 20 feet / 6 meters in diameter. Other features in this expansive parkland include trails suitable for both walking and cycling, a large amount of natural wildlife - such as deer and also the rare golden eagle, a children's play area, a swimming pool, picnic tables and restrooms.
Open hours: daily - 05:00 to 22:00
Admission: charge

Address: 1160 Battery Street, San Francisco, California, 94111, USA
Tel: +1 415 551 3602
Situated within the Financial District and next to the waterfront Embarcadero Road, Levi's Plaza Park is a well-kept area and is often a very popular place for picnic lunches. The park plays an important role in this business community, providing a relaxing spot in this part of the city.
Open hours: daily - dawn to dusk
Admission: free

Address: Telegraph Hill Boulevard, San Francisco, California, 94133, USA
Located just a couple of blocks to the west of Levi's Plaza, Pioneer Park is just under 5 acres / 2 hectares in size and is partially encircled by the Telegraph Hill Boulevard. Established in the 1870s, the park came into being as part of the United States Centennial celebrations. Particularly striking here is the Coit Tower, which was added in 1933.
Open hours: daily - dawn to dusk
Admission: free