There are an enormous number of beautiful churches and cathedrals in San Francisco and most are in superb condition.

Cathedral of Saint Mary of the Assumption

Address: 1111 Gough Street, San Francisco, California, USA, 941090
Tel: +1 415 567 2020
The Cathedral of Saint Mary of the Assumption in San Francisco is an imposing, white, modern Catholic church. With breathtaking modern architecture, the interior of the cathedral is vast and can seat almost 2,500 people. Highlights include a tall central dome which towers high into the sky, and floor-to-ceiling windows in the corner walls of this grand cathedral.
Open hours: daily - 06:30 to 18:00 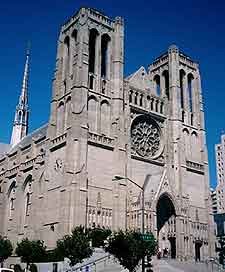 Address: 1100 California Street, San Francisco, California, USA, 94108
Tel: +1 415 749 6300
Situated in the Nob Hill district of San Francisco, Grace Cathedral is an impressive, historic building. Construction of the cathedral began in 1928 and it was built on the site of the Crocker mansion, which was destroyed by the devastating earthquake in 1906. Grace Cathedral was finally completed in 1964 and has many features, including its stained glass windows, particularly those by the French Loire studios which depict modern figures such as Albert Einstein. Also of interest are a series of frescoes completed by Polish artist John de Rosen in the 1940s, replicas of Ghiberti's bronze 'Doors of Paradise' from the Bapistry in Florence at the east end, and the exterior itself, which looks like stone, but is actually reinforced concrete beaten to achieve a convincing stone-like effect.
Open hours: Monday to Friday - 13:00 to 15:00, Saturday 11:00 to 13:30, Sunday - 12:30 to 14:00
Admission: free

Address: Dolores Street, San Francisco, California, USA
The city's oldest standing structure, the Mission San Francisco de Assisi (Mission Dolores) has withstood the test of time and survived two major earthquakes. In 1776, Father Francisco Palou came to the Bay Area in order to found the sixth in a series of missions that were dotted around the Californian coastline. From these small and humble beginnings grew what was to become the world-famous city of San Francisco. The mission's small chapel is a mixture of native construction methods and a Spanish-colonial style.

Address: 6210 Geary Boulevard, San Francisco, California, USA, 94121
Tel: +1 415 221 3255
The five golden onion domes of the Holy Virgin Cathedral look rather out of place in the suburbs, but this church is situated in a particularly appropriate location, where there is an active Russian community. The cathedral has many stunning features, including it domes, which are covered in 24-carat gold leaf, a striking mosaic of the Virgin Mary with golf-leaf-covered tiles and an impressive, ornate interior.
Open hours: daily - 18:00 to 19:00