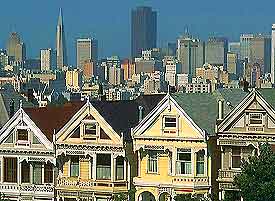 San Francisco is divided up into numerous, interesting districts, full of many excellent attractions, shops, restaurants and viewpoints. The main neighborhoods and districts in San Francisco include the following areas of the city.

To the east of the city's Golden Gate Park is the neighborhood of Haight-Ashbury, or 'the Haight'.

In the 1960s, around 200,000 people turned up at Haight-Ashbury in San Francisco for their summer of love. There have been numerous civil rights protests held in this district over the years and there are still regular boycotts against chain stores.


With many of the old Victorian houses converted into cheap houses, this area became very affordable and lots of young people moved into Haight-Ashbury, including the famous rock band, the Grateful Dead, who once lived at 710 Ashbury Street. When visiting this unique neighborhood, be prepared to meet some colorful and unusual characters. The Haight is well-known for its vintage merchandise, including clothes, records, books, jewelry, crystals, candles and many other similar items. 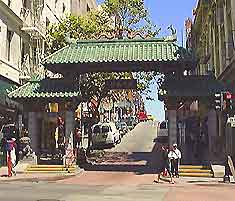 Chinatown in San Francisco is home to more that 20,000 American Chinese, most of whom speak Cantonese as a first language. This district is full of fragrant Chinese restaurants, street signs with Chinese calligraphy, dragon-entwined lampposts, pagoda roofs, excellent examples of Chinese architecture and brightly colored good-luck banners. Chinatown has one of the largest Chinese communities outside of Asia and has over 100 restaurants. The town main areas of Chinatown are Grant Avenue, where most of the tourist shops can be found, and Stockton Street, where many of the locals in Chinatown conduct their day-to-day business and there are usually sidewalk displays of fresh Chinese vegetables.

San Francisco is the gay capital of the world and the Castro district is the hub of the city's gay scene. Gay tours of this district are available and explain the history, from the days of the gold rush up to the 1970s, when the neighborhood settled. Following the epic summer of love festival, a group of gay men moved into the Castro district and it soon became a liberation zone for gay and lesbian people shortly afterwards.

Other Important Neighborhoods in San Francisco