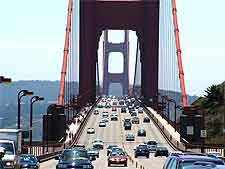 Plenty of sunshine and a friendly, welcoming vibe make San Francisco an extremely appealing location for gay and lesbian people to settle, enjoy a vacation or pass through on a road trip around California. This is without denial one of the USA's leading LGBT cities and the list of bars, clubs and similar nightspots here is certainly an extensive one, while Bakers Beach is a good place to hang out during the day with a like-minded crowd.

San Francisco's principal gay community is to be found in and around the Castro neighborhood. Belonging to the business district, this part of the city is centered around Castro Street, between 19th Street and Market Street. There is also a notable LGBT presence within the residential suburbs bordering Corona Heights, Haight-Ashbury, the Mission District and Twin Peaks, as well as the Noe Valley area.

For some of the best bars and clubs in San Francisco, the Castro area is most definitely the place to hang out. On Castro Street itself, popular evening entertainment comes in the form of the 440 Bar, Q-Bar and the Twin Peaks Tavern, with large windows meaning that you can watch passers-by on the street whilst enjoying a beer or cocktail. The intersecting Market Street is another popular spot for bars, where the Blackbird, the Cafe and the Lookout Bar all come with themed nights and live entertainment, such as karaoke nights, 'drag' racing and themed Friday and Saturday party nights.

There are more than a handful of LGBT events held in San Francisco throughout the year. In fact, it was right here in the city where the 'Gay Games' began in 1982 and this huge sporting event is now hosted by cities all over the world, being staged every four years. Currently, some of the most popular events include: