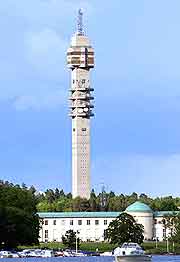 The Stockholm Arlanda Airport is the largest and busiest currently serving Sweden, handling more than 19 million international and domestic passengers a year. This airport was first built in 1959, but was not used as a commercial facility until the early 1960s. Since then, it has become one of the most important gateways into Scandinavia.

Three long runways operate here, with the longest measuring in at some 3,300 metres / 10,825 feet, while the other two are roughly 2,500 metres / 8,200 feet in length. There are four terminals - Terminal 3 and Terminal 4 serve regional and domestic flights, while Terminal 2 and Terminal 5 handle all of the international routes.

The largest airline using the Stockholm Arlanda Airport is Scandinavian Airlines. However, several other carriers are based here and include the likes of Norwegian Air Shuttle, Skyways Express and Amapola Flyg. The airport offers routes to both European and intercontinental destinations, such as Moscow, Riga, Vienna and Geneva.

Address: Luftfartsverket Arlanda, S-190 45 Stockholm, Arlanda, Sweden
Tel: +46 8 797 60 00
The Stockholm Arlanda Airport is found about 42 km / 26 miles to the north of Sweden's capital city. Uppsala, located to the north by about 32 km / 20 miles, is accessible via the E4 expressway. The E4 connects the airport with the centre of Stockholm.

Situated to the south of the airport, the neighbouring E4 expressway can be used to reach the Swedish capital, Stockholm, passing by Marsta, Upplands Vasby, Sollentuna and Solna as you head southwards. Travelling north along the same expressway will take travellers to Uppsala.

Airport coaches and the Swebus network carry passengers to the downtown areas of Stockholm and Uppsala. More than 40 departures occur each day. The buses pick passengers up from each terminal, outside their Arrivals exits.

Arlanda Express trains run between Stockholm and the airport every 20 minutes or thereabouts. Regular trains tend to be somewhat slower, taking about 35 minutes to make the same journey.

Taxis are available outside the terminals' exits. The Swedish Transport Authority taxis used at the airport are eco-friendly and generally take between 20 and 30 minutes to reach Stockholm city centre. The Haga Park (Hagaparken) is slightly closer, with its palace, pavilions and royal burial ground, and adjacent Radisson Blu Royal Park Hotel.