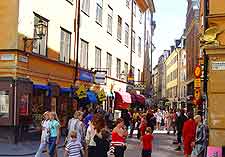 There really is no shortage of traditional Swedish craftworks and souvenirs at the many shops in central Stockholm, although the best goods are pricey - and heavy, being made of glass, crystal or pewter. However, shopping in Stockholm need not be expensive and many of the city's big department stores feature plenty of high quality gifts and are often happy to wrap them for you.

When shopping in Stockholm, do bear in mind that for most large purchases it will be possible to claim back tax, although you will need a stamp from the Swedish customs. For the best bargains, pay a visit to one of the city's bustling flea markets, such as the Östermalmshallen on Östermalmstorg square, or the Loppmarknaden on Bottenvaningen, which is the biggest flea market in the whole of Scandinavia. 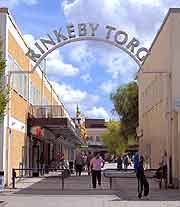 Most shops in Stockholm operate Monday to Friday from 09:00 or 10:00 until as late as 18:00, opening from 10:00 until 15:00 or later on Saturdays. Due to relaxed Swedish shopping laws, an increasing number of stores are now choosing to open on Sundays and extend their hours during the week, particularly the biggest names.

The main shopping districts in Stockholm are to be found between Gamla Stan and Hötorget, and also around the areas of Biblioteksgatan, Hamngatan and Kungsgatan. For high-street fashion, Hamngatan is hard to beat and is sandwiched between the Birger Jarlsgatan and the Sergels Torg, featuring both a large mall and prominent NK department store, which has been based here since the early 1900s. 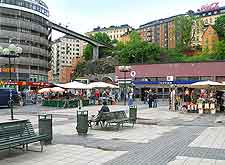 Further shopping districts in Stockholm reside to the south of Folkungagatan and throughout the busiest areas of the trendy Södermalm region, such as the Bruno Mall on Götgatsbacken. For the best in Swedish souvenirs, the many stores within the historic Gamla Stan offer good value and choice, while for designer fashion, you can expect to find names such as Armani, Gucci and Kookaï within the Östermalm area of Stockholm.

However, for the best value clothes shopping, pay a visit to Sweden's very own H&M store (Hennes & Mauritz) on Sergels Torg, which has been based in the city since 1968 and now chooses Stockholm to be its operational headquarters.