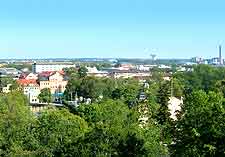 The fourth-largest of all Sweden's cities after Stockholm, Gothenburg and Malmo, Uppsala is an especially pleasant and pretty city, with many scenic waterways, winding streams, countless cycle lanes and a thriving youthful population of students, creating a definite feeling reminiscent of Amsterdam. There are many magnificent sights around central Uppsala, where the 15th-century Uppsala Cathedral (Domkyrka) is amongst the finest that Sweden has to offer.

The winding Fyris River has shaped much of Uppsala and divides the city into two main areas, with the historical quarter being located on the westerly banks and filled with tourism appeal. Head to the Uppsala Tourist Information Office on the Fyristorg for the latest entertainment news and current events.

Located on the very outskirts of the actual city, Gamla Uppsala is of great historical interest, where many people were once sacrificed to appease the Nordic gods. Today, Gamla Uppsala is chock full of archaeological remains, most of which relate to its highly religious Pagan past, with around 250 remaining burial mounds, including the three extremely important Royal mounds (Kungshögarna). 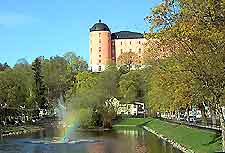 Take a stroll around the historical quarter of Uppsala, where many of the oldest and most notable tourist attractions reside. It will not be long until you spot the Uppsala Cathedral, which is known locally to the Swedish as the Domkyrka and built over a 150-year period, finally being completed in 1435. Another famous sight and once the home of Sweden's King Gustav Vasa is the Uppsala Castle, whose pink facade is hard to miss. Close to the castle, the city's Botanical Gardens features a wealth of exotic plants and entrance to these gardens is completely free of charge. During the summer, do check out the beaches around Aarhus Bay, Marselisborg and Risskov. More information about Uppsala Tourist Attractions and Landmarks.

There really is no need to visit Stockholm if you are looking for museums, since Uppsala has more than its fair share, imparting a range of information. The Upplandsmuseet is always a good place to start and is housed in an appealing 18th-century water mill, containing a range of exhibits relating to folk art in Sweden. Move on then to the Konstmuseum (Museum of Art) and its large collection of paintings, which span more than 500 years. For something quite different and unexpected in Uppsala, investigate the treasures from both Egypt and Sweden at the Gustavianium. More information about Uppsala Museums and Art Galleries. 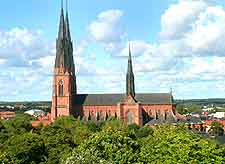 Many tourists choose to stay in Uppsala and explore this part of Sweden. Stockholm is less than one hour away from Uppsala, and as Sweden's capital city, a visit here really is a must. Also close by are the towns of both Norrtälje and Osthammar. Norrtälje is actually part of the vast Stockholm County and home to a beautiful waterfront and busy harbour, while Osthammar is best known for its appealing coastline and summer music festival. Famed for its extensive Viking heritage, the neighbouring city of Västeras is also worth finding and lies alongside Lake Mälaren. More information about Uppsala Attractions Nearby. 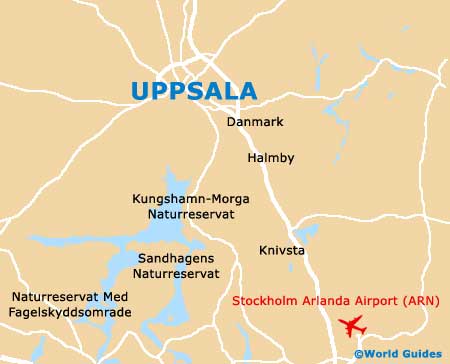