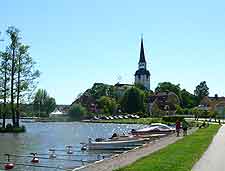 The endless attractions within the Stockholm area are best explored by car, or alternatively, consider using either a popular SL Tourist Card or a monthly pass, both of which enable you to enjoy unlimited travel on public buses and also on trains. The picture-postcard islands within the Stockholm archipelago are close to the city itself and their many coastal attractions are easily reached by inexpensive, regular ferries.

Those lucky enough to visit the beach attractions on these Swedish islands during the summer months will immediately notice a strong flavour of the south of France and it is easy to forget where you actually are in the world. The island of Sandön is particularly close to Stockholm, where the best beaches are to be found around Trovill, on the very southerly tip of Sandön, while some acclaimed historic wooden houses lie within the more northerly settlement of Sandhamn. 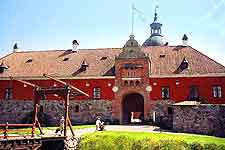 A small and enchanting lakeside village situated within Sweden's Strängnäs Municipality, Mariefeld is around 80 km / 50 miles to the west of Stockholm. One of the main attractions in Mariefred is without doubt its eye-catching Royal Gripsholm Castle (Gripsholm Slott), which was originally constructed in 1370 and is everything that you would imagine a castle to be, with round towers, tall spires and an imposing wooden drawbridge. Mariefred's Gripsholm Castle contains an extensive state portrait collection, dating from the 16th century.

There are many Viking-related attractions within the town of Birka, which is believed to be Sweden's most historic, being founded in 760 AD. Located within the Gulf of Finland and on the island of Björkö, Birka was once an important Viking trading centre and is today home to a number of noteworthy archaeological sites. Birka contains Scandinavia's biggest Viking-age cemetery, which features the graves of around 3,000 Vikings in total. Many interesting Viking artefacts excavated from this part of Sweden are housed within the Birka Museum, along with a model of how the village actually appeared during Viking times.

Famed for its Mediterranean-style sandy beaches and beautiful coastal scenery, the island of Sandön is the perfect place to be on a sunny day. The vibrant nightlife on Sandön is another of its many draw cards, along with its quayside restaurants, gift shops and boat trips. Tourists from Stockholm will find that the main attractions on Sandön can be easily explored as a day trip. 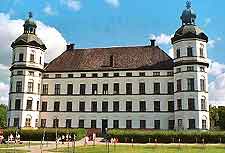 A small and charming town within the metropolitan area of Stockholm and around 40 km / 25 miles to the north-west, Sigtuna is amongst the most pleasant and appealing attractions nearby. This is Sweden's oldest surviving town and Sigtuna was actually founded in AD 980. The main drag is known as the Storagatan and is lined with many medieval buildings and houses. Sights to see include the ruined churches of both St. Lars and St. Per, the 13th-century Dominican monastery of Mariakyrkan, the landscaped Lundströmska Gardens, the Rosersbergs Slotts, and the Sigtuna Museum. 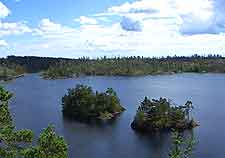 Many recreational activities and popular outdoor attractions are to be found within Tyresta National Park, where endless hiking trails and beautiful wilderness scenery await visitors. The Tyresta National Park covers around 50 square kilometres / 19 square miles and can be found approximately 20 km / 12 miles to the south-east of Stockholm. This is a particularly beautiful part of Sweden and contains a series of small lakes, rocky outcrops and areas of marshland, where a wealth of birds and other wildlife resides.

The pastoral island of Vaxholm is always filled with tourists during the summer months and is around 35 km / 22 miles to the north-east of central Stockholm. Founded in 1647, the most historic attractions within Vaxholm are to be found within the Norrhamn district, close to the town hall. Look out for the Vaxholm Kastell (Citadel), a grand fortress rebuilt in 1863 and home to the National Museum of Coastal Defence. Regular ferries depart from the Söderhamn harbour.