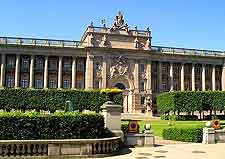 As Sweden's historic capital city, Stockholm is brimming with landmarks from the past and tourists will not have to look hard to spot many grand buildings, towering landmarks and carved stone fountains. One of most famous of Stockholm's many landmarks is Drottningholm Palace (Drottningholm Slott), the private residence for Sweden's illustrious royal family and dates from the latter part of the 16th century.

Located in Gramla Stan, the Old Town district of Stockholm, the Stortorget (Big Square) is surrounded by a series a grand landmarks and historic structures, such as the palatial Stock Exchange Building (Börshuset), which replaced the town hall and today contains both the Nobel Library and the Nobel Museum. Something a little more modern and up-to-date, both the Globe Arena (Globen) and the Kaknäs Television Tower (Kaknästornet) showcase the city's more recent architecture styles and stand as indisputable monuments to the 20th century. 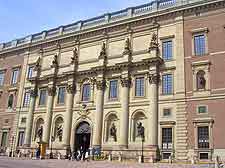 Address: Kungl Slottet, Stockholm, SE-11130, Sweden, SE
Tel: +46 08 402 6130
Stockholm Palace is perhaps the most famous of all the city's many, many impressive landmarks and is the official residence of the Swedish monarchy. The palace itself is huge and imposing, although fairly uninspiring from a distance and the architecture lacks many of the elaborate features that many other Swedish landmarks possess. However, up close, this is a grand building and was constructed between 1697 and 1760. Look out for the ever-popular changing of the guard ceremony, which is always a crowd pleaser.
Open hours: daily guided tours - 11:00, 13:00 and 15:00
Admission: charge, discounts available

Address: Drottningholm, SE-17802, Sweden, SE
Tel: +46 08 402 6280
This classical architecture of Drottningholm Palace offers a romantic, almost fairytale appearance and is surrounded by formal gardens with endless topiary and clipped hedges. The palace complex itself comprises a number of important and rather surprising landmarks, such as the 18th-century Drottningholms Slottsteater (Drottningholm Palace Theatre), and the Kinesiska Paviljongen (Chinese Pavilion), all of which have been awarded the status of World Heritage Site. The Chinese Pavilion is now used as a cafeteria for visiting members of the public.
Open hours: daily, seasonal variations
Admission: charge, discounts available 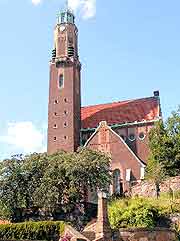 Address: Östermalmsgatan 20, Stockholm, SE-114, Sweden, SE
Tel: +46 08 406 9800
The award-winning Engelbrekt Church (Engelbrektskyrkan) dates back to the early 20th century and offers a subtle mixture of Byzantine and Art Nouveau influenced architecture. Standing high above much of Stockholm, the church's tower is its most obvious feature and can be seen for literally miles.
Open hours: Tuesday to Sunday - 11:00 to 15:00
Admission: free, donations suggested

Address: Rosendalsvägen 49, Stockholm, SE-11130, Sweden, SE
Tel: +46 08 402 6130
Constructed as far ago as the 1820s, Rosendal Palace was used for many years by King Karl XIV Johan as his popular summer escape when he required some respite. The interior is especially elaborate and boasts endless antiques, period furnishings and many notable portraits. Rosendal Palace is easy to find and is located on the southern side of the Djurgarden.
Open hours: guided tours, June to August, Tuesday to Sunday - 12:00, 13:00, 14:00 and 15:00
Admission: charge 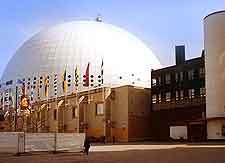 Address: Arenagangen, Stockholm, SE-121 27, Sweden, SE
Tel: +46 08 725 1000
The aptly named, hemispherical Globe Arena is currently enjoying the prestigious status of being the biggest structure of its kind on the entire planet, boasting a diameter of around 110 metres / 328 feet and height of 85 metres / 278 feet. Stockholm's Globen is regularly used for concerts, shows, various sporting events and even ice hockey games, and has a total maximum capacity for around 16,000 seated spectators.
Open hours: hours vary
Admission: charge, discounts available for some events 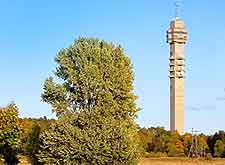 Address: Mörka Kroken 28-30, Stockholm, SE-11527, Sweden, SE
The Kaknästornet television tower dominates the Östermalm area of Stockholm and stands at more than 150 metres / 494 feet high, making it the city's tallest structure. This is a relatively modern landmark which was erected in 1967 and for many years remained the tallest building in the whole of Scandinavia. A speedy lift will transport visitors to the very top, where they are met with breathtaking views, an outdoor observation deck and a popular restaurant.
Open hours: daily - 09:00 to 22:00
Admission: charge

Address: Riddarhustorget 10, Stockholm, SE-11128, Sweden, SE
Tel: +46 08 723 3990
The famous Swedish House of Lords has been a noteworthy landmark in Stockholm for more than 300 years, being completed in the middle of the 17th century and boasting exquisite Baroque architecture with strong Dutch influences. Today, the Riddarhuset houses a private institution, which concentrates on preserving much of Sweden's rich culture and history, and also features an acclaimed genealogical department and library.
Open hours: daily
Admission: free 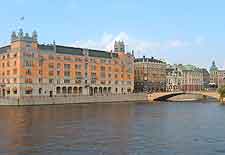 Address: Drottninggatan 5, Stockholm, SE-10333, Sweden, SE
Tel: +46 08 405 4160
A prominent landmark located in central Stockholm, the Rosenbad dates back to the very start of the 20th century and was originally built for fulfil a variety of purposes, housing a restaurant and function rooms. Today, the Rosenbad serves as an office for Sweden's Prime Minister, and is also used by the Government Chancellery. The orange façade stands out, making the Rosenbad quite recognisable, particularly when the building catches the sunlight.
Open hours: Monday to Thursday - 11:00 to 17:00, Friday - 11:00 to 16:30
Admission: charge 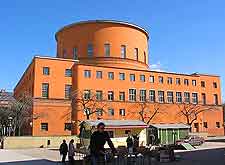 Address: Sveavägen 73, Stockholm, SE-113, Sweden, SE
Tel: +46 08 5083 1100
Construction of the eye-catching Stockholm Public Library began in 1924 and just four years later, it officially opened it doors for the very first time. Designed by a prominent local Swedish architect, the Stadsbiblioteket was always destined to become a much-loved local landmark. Its central circular elevation and bright orange exterior are the main features, while inside, the stylish reading halls and multi-language books are also of interest.
Open hours: daily
Admission: free

Address: Hantverkargatan 1, Stockholm, Sweden, SE
Tel: +46 08 5082 8500
The majestic City Hall has become one of Stockholm's most visited landmarks and each year almost half a million people visit this famous building, often photographing its red-brick facade reflecting into the adjacent rippling waterfront. Situated on the island of Kungsholmen and completed in 1923, after just 12 years of construction, the Stockholms Stadshus is based around two large squares and known for its vast interior and 'Blue Hall'.
Open hours: daily guided tours
Admission: charge

Address: Tullgarn, Vagnhärad, SE-61070, Sweden, SE
Tel: +46 08 5517 2011
This spectacular palace serves as a summer residence for the Swedish monarchy and stands proudly alongside Häggnäsviken Bay and on Stockholm's Trosa Archipelago. The Tullgarn Palace was completed in 1720 and became the property of the state some 50 years later, and in the 19th century, was a favourite destination of Queen Victoria of Baden.
Open hours: June to August, daily - 11:00 to 16:00
Admission: charge