Getting Around, Stockholm Travel, Transport and Car Rental 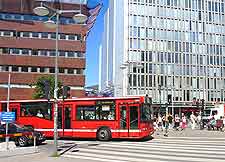 All of the public transport within Sweden's capital city of Stockholm is operated by the Storstockholms Lokaltrafik, often known as simply 'SL' for short. The main travel options provided include Tunnelbanan metro trains (T-Bana), local trains, and a range of buses, which cover both the zoned inner city and the entire county of Stockholm.

For transport information, timetables and maps, there is an office of the Storstockholms Lokaltrafik within the basement of the Central Station (Centralstationen), close to the Sergels Torg entrance. Here you can also purchase both the Stockholm Card and the SL Tourist Card (valid for 24 or 72 hours), which allows considerable savings on travel if used regularly during your stay. If you have plenty of time on your hands, then cycling is a particularly pleasant way to travel around much of the city and various cycle paths are now provided. 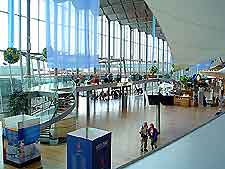 Address: Luftfartsverket Arlanda, Arlanda, SE-19045, Sweden, SE
Tel: +46 08 797 6000
In close proximity to the town of Märsta and around 42 km / 26 miles to the north of the city centre, Stockholm Arlanda Airport is currently the biggest air facility in the whole of Sweden and is also amongst the busiest in Scandinavia, seeing over 19 million passengers each year. Stockholm city centre is linked to the airport by a number of different and convenient transport options, including taxis (Solna / Airport Cab), the Airland Express Train, and Flygbussarna coaches, which travel along the E4 highway.

Stockholm is also connected by three additional, but smaller airports: 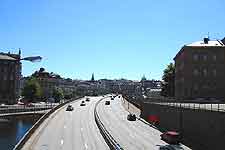 In general, you would not be advised to consider driving in central Stockholm. This part of the city is full of rather congested bridges and is also home to a number of somewhat confusing one-way streets. Also bear in mind that the Djurgardsvägen is closed at night and also during the weekends in the summer. Parking is also another problem and extremely limited here. However, all that said, if you choose to hire a car with plans to explore the Sweden outside of Stockholm, to visit attractions such as the Viking town of Birka or the beach resort of Sandön, then this particular mode of transport comes highly recommended. 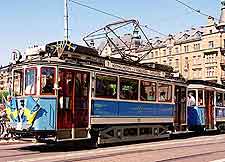 Many tourists often find the city's bus timetables a little complicated, although do spend some time studying them, since they provide handy and inexpensive links to many of the city's outlying suburbs. Inner-city bus transport in Stockholm travels outwards from the Fridhemsplan, Odenplan and also Sergels Torg, operating throughout the day and at night. One to three day transit passes provide particularly good value if you intend to use the buses and light rail system, and are also valid for ferry travel. There is also a historic tram (no. 7), which travels at a fairly slow pace between Norrmalmstrog and Skansen, being well suited for sightseeing purposes. 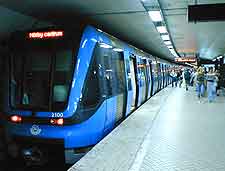 Going by the name of 'Tunnelbanan' or simply 'T-Bana', Stockholm's metro trains are a firm favourite with the local Swedes, who generally deem this to be the most useful form of public transport in the city. T-Bana metro trains provide both a quick and cheap way to travel, with all of its three lines connecting to the T-Centralen station, just a short walk from the main Centralstationen. There are around 100 different T-Bana stations, with trains running into the early hours of the morning - 01:00 on weekdays and 03:30 at the weekend.

The commuter train transport provided in Stockholm is known locally in Swedish as the 'pendeltag' and covers a large proportion of the actual metropolitan region, with a total of 51 train stations travelling to destinations such as Märsta, Nynäshamn and Södertälje. Busy routes feature trains which travel around four times an hour and include the popular Kungsängen / Västerhaninge line. Those simply wishing to travel outside the inner city should consider using the light rail network (Tvärbanan). These trains loop around much of the city centre and travel in a south-easterly direction.

Finding an available taxi in the city is rarely a problem, although do be warned that this is an expensive way to travel. However, for short journeys, taxis are extremely convenient. Some of the more reputable companies include Taxi 020, Taxi Kurir and also Taxi Stockholm, all of which are highly recommended.