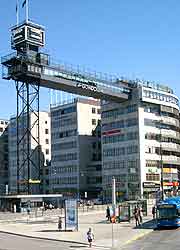 Home to many of the most impressive tourist attractions in the whole of Sweden, Stockholm is a rich city in every sense of the word, and its considerable wealth is reflected within its many grand and historic buildings. Sightseeing in many of Stockholm's most central districts is often best done on foot, allowing you to take your time and explore the attractions entirely at your own pace.

Others prefer to enjoy a peaceful cruise along the numerous waterways around Stockholm, with various packages being available, including guided boat trips and even an old steamship, which is operated by Strömma and heads out of the city environs, passing a number of neighbouring islands and archipelagoes along the route.

Visitors wishing to spend as much time sightseeing as possible should consider purchasing a Stockholm Card, which will allow free entry to almost 100 different tourist attractions and museums, along with unlimited bus travel, a free one-hour river cruise and a complimentary travel guidebook, complete with maps.

Address: Slussen, Stockholm, SE-11130, Sweden, SE
Tel: +4608 642 4785
A major attraction in the Södermalm area of Stockholm, the Katarinahissen was built as long ago as the 1930s and has remained popular ever since. This is actually a speedy lift which elevates its passengers to just under 40 metres / 130 feet above the ground, where an observation deck offers favourable views across the historic Gamla Stan district and beyond. There is also a restaurant at the top, should you require a bite to eat.
Open hours: Monday to Saturday - 07:30 to 22:00, Sunday - 10:00 to 22:00
Admission: charge

Address: Södra Blasieholmshamnen, Stockholm, Sweden, SE
Lake Mälaren is Sweden's third-biggest lake and is located on the westerly side of Stockholm. This freshwater lake is linked to the Baltic Sea and is up to 64 metres / 210 feet deep. Used by the Vikings as a bay of the Baltic Sea and allowing large ships to sail well into Sweden, Lake Mälaren is today used for boat tours, where passengers can enjoy a leisurely sightseeing cruise around the lake and shoreline of the archipelago, departing from the Strömkajen pier.
Open hours: daily - 24 hours
Admission: free 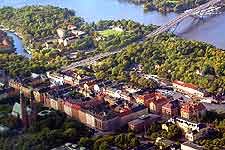 Address: Stockholm, SE-102 72, Sweden, SE
Tel: +46 08 720 8500
Located alongside the Södermalm area of Stockholm, Langholmen is a small and rather appealing island, brimming with areas of extreme natural beauty. Tourists come here for the coastal attractions, which include a sandy stretch of beach, calm waters suitable for swimming, and a number of quality seafood restaurants. Waterfront lawns and benches offer the perfect place to enjoy a peaceful, relaxing picnic.
Open hours: daily - 24 hours
Admission: free 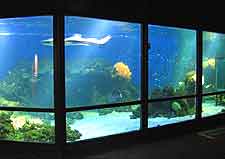 Address: Falkenbergsgatan 2, Stockholm, SE-11521, Sweden, SE
Tel: +46 08 660 9089
Much more than just an aquarium attraction, the Aquaria Vattenmuseum is an enjoyable 'water museum' with many themed zones and exhibits, including a living rainforest with mangroves and piranhas, a reconstruction of a coral reef, and shark feeding demonstrations. The sharks housed within the sea aquarium are best viewed by entering the glass tunnel, where you can also get up close and personal with clownfish, giant moray eels, starfish and more. There is also a cooler Nordic fountain pool where wild sea trout come each year to spawn, via a fish ladder - something quite unmissable.
Open hours: Tuesday to Sunday - 10:00 to 16:30
Admission: charge, discounts for young children

Address: Hagaparken, Stockholm, SE-169 70, Sweden, SE
Tel: +46 08 730 3981
Located on the northerly outskirts of the city, the Fjäril och Fagelshuset can be found within Hagaparken and features a tropical greenhouse with many exotic plants. Around 400 large and bright-coloured butterflies flutter all around the butterfly room, where there is an interesting display of caterpillars and cocoons. There are also a host of other attractions, such as leaf-cutter ants, exotic frogs, seahorses, free-flying parrots and hummingbirds, Japanese gardens, and even horse-drawn carriage rides.
Open hours: April to September - Tuesday to Friday - 10:00 to 16:00, Saturday and Sunday - 11:00 to 17:30; October to March, Tuesday to Friday - 10:00 to 15:00, Saturday and Sunday - 11:00 to 16:0
Admission: charge, discounts for children, families and seniors, children four years old and under are free

Address: Lilla Allmänna Gränd 9, Stockholm, SE-115 21, Sweden, SE
Tel: +46 08 5875 0100
Without doubt one of the best family friendly attractions within the whole of Stockholm, the Tivoli Gröna Lund is an extremely popular theme park, situated alongside the shoreline of the Djurgarden Island. The Tivoli Gröna Lund contains all of the usual amusement park attractions, such as three roller coasters, fast rides, carousels, a tunnel of love and a haunted house, as well as being used as an excellent venue for outdoor rock concerts, which have been known to attract audiences of more than 20,000.
Open hours: April to early September, daily - seasonal variations
Admission: charge, discounts for children and families