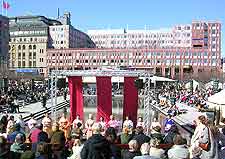 Sweden's capital city of Stockholm is where many of the countries biggest and brashest festivals are held, at venues such as Cirkus Arena (Circus Arena) on the Djurgardsslätten, a historic exhibition space dating back to the early 1890s, regularly hosting rock concerts and similar events. Sport fans will find a range of sporting events taking place in the Stockholm Olympiastadion (Olympia Stadium) in the Lidingövägen area, where the Swedish Olympic Games took place in 1912.

For information about the latest cultural festivals, events, things to do and happenings during your stay in Stockholm, pay a visit to the Kulturhuset (House of Culture). Located on the Sergels Torg, the Kulturhuset also hosts a series of art exhibitions and is hard to miss, being an imposing glass structure and brightly illuminated in red. 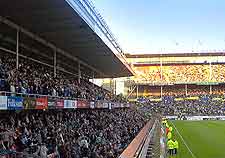 During the summer, the Mosebacke Etablissement in the Södermalm area of Stockholm boasts a theatre, seasonal festivals and also stunning views across the sea and the Djurgarden.

In the winter months, the outdoor ice skating rink in the Kungsträdgarden is the place to be and is always busy, regularly featuring live music and hot snacks.