Valencia Weather, When to Go and Climate Information 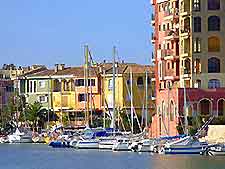 Valencia is often described as having a Mediterranean climate, which translates as hot, dry summer weather and mild winter months. Temperatures in Valencia are particularly pleasant throughout the year and remain well above freezing, except around the inland and mountainous areas nearby.

With almost 3,000 hours of sunny weather each year - around eight hours of sunshine per day, Valencia is known for its glorious weather and appealing climate. Valencia is located in the heart of Spain's eastern coast and the white sandy beaches are extremely popular during the summer season. 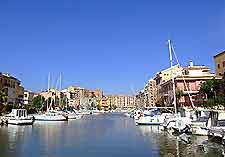 Spring is the perfect time to visit Valencia and the climate is generally fairly mild, particularly along the coastline. Rainy weather is more common during Valencia's springtime, with occasional heavy downpours. However, the wet weather is often soon to clear and sunshine is never far away. Average temperatures in February are around 16°C / 61°F, although by the end of March it is generally beach weather, being warm enough for shorts and T-shirts during the day, although night times can still be a little chilly.

The summer weather and climate in Valencia is hot, with daytime temperatures between June to September averaging around 28°C / 82°F. Temperatures peak during July and August, reaching 30°C / 86°F or more. Summer is the high season in Valencia and the city becomes a major tourist destination, with visitors arriving to take advantage of the sunny weather and beautiful sandy beaches along the coast. 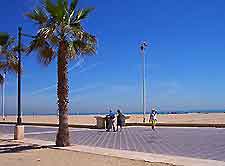 The Mediterranean Sea is especially warm at the height of summer, with water temperatures easily reaching 25°C / 77°F, making swimming and bathing extremely tempting. Valencia's warm weather continues into the night, with warm balmy evenings meaning that outdoor entertainment and al fresco dining is the order of the day.

Autumn weather in Valencia can be wet at times, although this is still a good time to visit the area, with mild temperatures and many full days of sunshine. Temperatures in Valencia during September average around 25°C / 77°F, and by late October / early November, have dropped to 19°C / 66°F.

November, December and January tend to feature the coldest weather and climate in Valencia, although temperatures generally remain well above 10°C / 50°F, and sea water temperatures average around 13°C / 55°F. Valencia's beaches are still used at this time of the year, particularly during sunny weather, although they remain much quieter. By the end of January it starts to feel as if spring is just around the corner and the climate begins to noticeably improve.