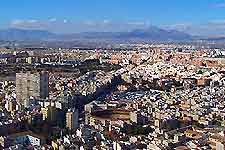 Valencia is a vast Spanish city with a population of more than 700,000. Split into a series of notable districts and regions, much of life in Valencia is based around the Old Town district, which lies in the very heart of Valencia. Here you will find many fabulous historical landmarks and buildings, which are particularly clustered around Valencia's Old Quarter (Parte Vieja).

Being home to an enormous university complex, it will come as no surprise that the district around the University of Valencia (Universitat de València) is particularly animated and known for its restaurants, bars and nightspots. Also worth a mention are Valencia's selection of popular sandy beaches, which can be found on the eastern side of the city. Here are Valencia's main districts, neighborhoods and locations. 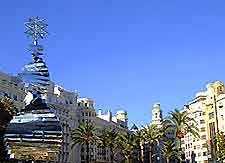 Central Valencia is not only the heart of the city, but the heart of the action. Cobblestone streets contrast with numerous old and historic buildings in central Valencia, with a maze of streets and alleyways situated around the Barrio del Carmen area, to the north of the Mercado Central. Many notable landmarks can be found in this part of Valencia, particularly in the Old Quarter (Parte Vieja), around the Plaza de la Reina, with a number of grand palaces and mansions now containing noteworthy restaurants and hotels.

Much of Old Town Valencia is undergoing constant renovation and a new city centre is gradually appearing, although still retaining much of the original charm. Although the ancient Valencia city walls were demolished in 1871 to make way for progress, in the form of a large ring road, two ancient gateways survive and serve as an important reminder of the city's past. The most historic part of Valencia is almost completely surrounded by a large loop of the Turia riverbed, which is now home to a series of particularly attractive landscaped gardens, created after it was diverted in 1957 following severe flooding of the area. Several popular pathways and cycle trails now line the old Turia River. 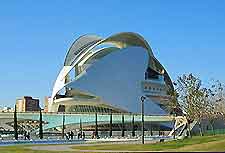 Also worth a mention, the Plaza del Ayuntamiento stands in the centre of this area and is the city's largest public square, being home to Valencia's 18th-century City Hall. To the south of central Valencia lies the spectacular modern development of the Valencia City of Arts and Science (Ciudad de las Artes y las Ciencias), which can be found along the Avenida Instituto Obrero de Valencia. Now one of the city's main draw cards, the contemporary City of Arts and Science complex comprises four main attractions, the Palace of the Arts, the Oceanographic Park, the Prince Felipe Science Museum and the Planetarium, all of which are equally impressive.

Founded at the end of the 15th century, the University of Valencia, known locally as the Universitat de València, has become one of the country's largest universities, housing around 60,000 students and four spacious campuses. Many of Valencia University's main campuses can be found close to the Turia gardens, outside of the historic city centre.

A particularly modern and lively part of Valencia, this university district contains a number of tall, glass-clad skyscrapers and some of the city's best nightclubs and eateries, which often stay open well after midnight. Nearby, on the edge of the Tuira Gardens, the Palacio de la Música (Music Palace) is located along the Paseo de la Alameda and offers a number of outdoor concerts and summer events.

Centred around the Calle de Colón, the Cánovas district of Valencia is well-known for its excellent shopping, together with a number of top restaurants offering fine dining. Situated on the outskirts of Old Town Valencia, the Cánovas neighborhood is home to a branch of Spain's iconic department store, El Corte Inglés, which contains a number of floors, including a clothing department and large food court. 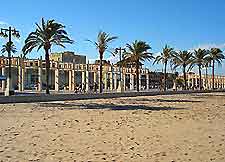 One the eastern side of Valencia you will find the region's magnificent coastline, alongside the Mediterranean Sea, together with a number of clean, sandy beaches. Valencia's main beaches include the Playa de Las Arenas, the Playa de La Malvarrosa and the Playa de Alboraya, which feature boardwalks and promenades, outdoor dining and terraces, plenty of nearby shops and restaurants, together with truly stunning views. Also nearby, the Playa de La Patacona offers many traditional beach attractions and stands to the northeast of central Valencia, to the south of Port Saplaya.