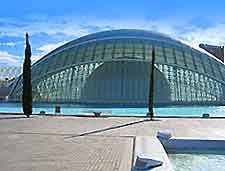 Valencia Airport is Spain's eighth-busiest, serving some five million people each year. It is located to the west of central Valencia and contains a single terminal that welcomes mostly tourists and business travellers.

Also known as Manises Airport, the facility has only one runway of 3,200 metres / 10,500 feet in length. Despite this, the airport is still an efficient hub for the Mediterranean coast of Spain. Regional and international flights are handled here within separate zones of the terminal building.

Air Nostrum is the largest airline using this facility as a hub. However, Ryanair, Vueling Airlines and Wondair also use Valencia Airport as a base. Roughly 80,000 aircraft now land and take off here every single year, and this number is gradually rising.

Address: Carretera del Aeropuerto s / n, E-46940 Manises / Valencia, Spain
Tel: +34 96 159 85 00
The airport is situated some 9 km / 6 miles from the heart of Valencia, lying close to the suburbs of Aldaia, Barrio del Cristo, Paterna and Quart de Poblet. The V-11 connects to the E-901, which in turn links the downtown area. Of note, passengers can reach central Valencia in less than 15 minutes when traffic conditions are favourable.

Passengers who choose to drive into downtown Valencia can take the V-11 highway from the airport to the E-901, which heads in a south-easterly direction, right into the heart of the city. This journey takes around 20 minutes. The A-3 and A-7 routes pass just to the north of the airport and can be used to reach both Madrid and Barcelona.

Several bus services are provided for passengers. The MetroBus line takes about 45 minutes to reach Valencia city centre, although the price is reasonably cheap. There is also an airport shuttle bus known as the Aerobus, which takes just 20 minutes to reach centrally located hotels.

Metro Line 3 and Line 5 both link the airport with other Valencia stations, including the Carrer de Colón (roughly 25 minutes away). These trains are the cheapest and fastest transport option available for getting into the city centre.

Taxis are readily available at the airport, but travellers should be aware that prices for getting into and getting out of the city by taxi are significantly different. Minimum fares are often applicable, as well as chargeable waiting time, with fares being calculated according to zones. Of note, Zone A includes both Valencia and Mislata, while Zone B comprises destinations such as Albalat dels Sorells, Alfara del Patriarca, Benetússer, Foios, Godella, Massalfassar, Paiporta, Picassent, Rocafort, Sollana, Tavernes Blanques and Vinalesa, amongst others. Taxco and Radio Taxi are two of the main cab companies operating here.