The city of Valencia has a history as rich and diverse as any place in Spain thanks to the investments of Roman, Arabic and Christian powers that each ruled the city for long periods.

Valencia's historic centre is one of Spain's largest, being filled with ancient monuments and cultural attractions that lure millions of visitors each year. Yet this vibrant city also has a modern face and ranks amongst Europe's busiest commercial ports.

It is well known that the history of Valencia begins with the Romans, who founded the town of Valentia in the year of 138 BC, on the back of Greek and Phoenician settlements. In the centuries that followed, Visigoths, Byzantines and finally Arabs each had their turn at ruling this coveted port on the Mediterranean.


The Arab Moors, who occupied this spot for some 500 years from the 8th century onwards, left a major impact on this city. The Moors introduced a vital irrigation system to the area that allowed the cultivation of olives, rice and the famous Valencian oranges. The Arab legacy can still be admired in the remnants of the Old City towers around the Portal de Valldigna Street, the Banos del Almirante bath house and the El Micalet tower.

Valencia's history contains a unique chapter in the struggle between the Christians and the Moors. The infamous Castilian military commander and nobleman El Cid, who wanted his own Christian fiefdom, besieged Valencia in the latter part of the 11th century. After two years he took the city, which he ruled for a total of five years from 1094 until he was killed defending the city from the Moors. The epic poem 'The Lay of the Cid' tells this story.

In 1238, King James I of Aragon conquered Valencia and forced the Moors to surrender. This marked the end of a glorious era as some 50,000 Moors were exiled, including legendary poet and diplomat Ibn al-Abbar.

James I formed the Kingdom of Valencia and allowed any of the remaining Jews, Christians and Muslims to stay. This tolerant approach let the city maintain its rich cultural diversity. 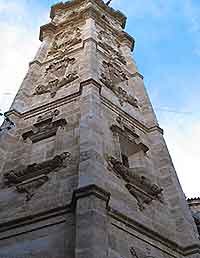 The 15th century is known as the Valencian Golden Age, a period when arts and culture flourished in the city. With the city's commercial success came a burst in artistic and cultural activity.

Valencia's history manifested itself during this era with landmark buildings being constructed, such as the Serranos Towers (Torres de Serranos) in the late 14th century.

Textile production and banking fuelled the local economy, financing Christopher Columbus's famous 1492 expedition and establishing the vital Silk Exchange, now a UNESCO World Heritage Site. Throughout the 16th century, this was one of the Mediterranean's most influential cities.

Following the Golden Age came a terrible crash. The 17th century started off with the expulsion of the city's Jews and Moriscos (Moors who had converted to Christianity). This forced expulsion removed more than 30 percent of Valencia's population, crashing its economy and ruining most of its nobility. The decline peaked with the War of Spanish Succession in 1702, when Valencia allied with the wrong side. The city was occupied by English troops and then looted by the French Bourbon army.

Time of the Renaissance

The 19th century was much better for Valencia, its history put back on track by a movement to restore the heritage of the Catalan language and regional traditions. Local pride also boosted the economy, turning this city into an industrial powerhouse by the beginning of the 20th century. The Art Nouveau North Station, as well as the Columbus and Central Markets are reminders of this return to glory.

Though the nationalist dictatorship of Francisco Franco y Bahamonde put the brakes on Valencia's growth and rediscovery of its Catalan roots, the city returned to its prosperity following Franco's death. Today, the city is known as much for its industry as its rich cultural offerings like its art museums, historic Old Town and its modern City of Arts and Science, a major cultural, architectural and entertainment complex.