Getting Around, Valencia Travel, Transport and Car Rental 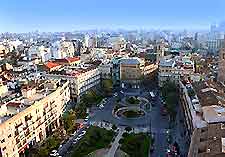 A variety of public transport is available in and around the city of Valencia, with most visitors arriving at the nearby airport. Close to the city, Valencia Airport (VLC) offers a range of ground transport and travel options, which operate at regular intervals throughout the day.

Those wishing to travel around the Valencian Community area can choose between buses, trains and the city's fast Metro subway network, all of which are reasonably priced. Further road transport in the city includes a choice of car rental and local taxis.

Valencia Airport (VLC) is situated 9 km / 6 miles from the city centre. There are many facilities onsite, such as food and drink outlets, ATM machines, bureau de change, shopping facilities including duty-free and gift shops, a pharmacy and first-aid services, newsagents, VIP lounge, banking and parking facilities.


A variety of well-known car hire companies are situated at the airport including Avis, Centauro, Europa, Europcar and Hertz. The taxi rank at Valencia Airport is located outside of the airport's terminal building. Further ground transport includes buses, which travel to and from the airport every 10 to 15 minutes, between the departures area and Valencia bus centre. 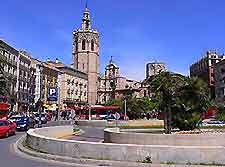 There is a choice of well-known car rental companies in Valencia. Drivers must wear seat belts and children under 12 year of age must use a child seat.

Located close to the centre of Valencia is the bus station. There are a variety of bus companies that operate in the city, which travel to the nearby towns and further afield to many of Spain's main cities, including Madrid and Barcelona.

Valencia sightseeing tours are available, covering many places of interest in the city, including the Bull Ring, the Music Palace, the City of the Arts and Science, the Tower of Los Serranos and the Palace of Temple.

The Valencia train station, Estación del Norte, is situated close to the city centre. Train journeys are a fairly inexpensive and efficient way of travelling and depart from the train station to numerous cities in Spain, and further afield to many European cities.

Valencia also has an excellent Metro subway network named the 'Metrovalencia', which is an ideal way of travelling around Metropolitan Valencia. The system comprises five lines and for passengers who use the Metro system frequently, vouchers and passes are available at the stations.

Cycling is a pleasant way to travel around Valencia. The city is fairly flat and there are many cycle lanes throughout. There are bike rental facilities available.

The city operates a ferry service running all the way to the nearby islands of Ibiza, Mallorca and Menorca. There are also scenic cruises around the port of Valencia, which provide the perfect way to appreciate the cityscape and skyline.